On the occasion of Republic Day on January 26, soldiers posted at Jammu and Kashmir’s Siachen were treated with a surprise by leading pizza delivery company Domino’s. The fast food joint sent a team to the Army base camp at the Siachen on Saturday to deliver fresh and hot pizzas to the soldiers guarding the border for the country. Domino’s took to Twitter to share pictures of moment stating that they were honoured to serve the hot pizzas to the brave soldiers as a gesture of gratitude for their untiring service to the nation. 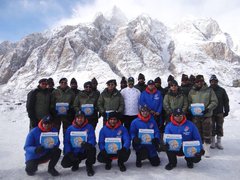 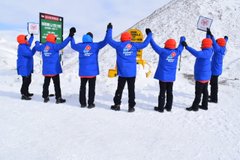 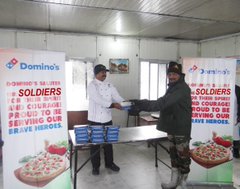 We are honoured to have served hot Domino’s pizzas to our brave Soldiers and Officers at Siachen as a gesture of our gratitude for their untiring service to the nation.#DominosinSiachen #Republicday2019⁠ ⁠

In the video surfacing on Twitter, the soldiers can be seen lined up to take their pizzas with smiles and cheers. Another pictures show the soldiers enjoying the pizza surprise with joy. Netizens took to Twitter to thank Domino’s for their initiative in spreading smiles and to salute the soldiers for their bravery in guarding the border and protecting the nation.

#DominosinSiachen They served hot Domino’s pizzas to our brave Soldiers and officers at Siachen as a gesture of gratitude for their untiring service to the nation. All hard work of last 3 months preparation worth it seeing smile on faces of our men in uniform. pic.twitter.com/IXML1FBtox

At an average altitude of more than 20,000 feet, the Siachen base camp is the world’s highest and one of the coldest battlefields with temperatures dropping to minus 60 degrees Celsius in the winter season.

Too little time: Four big challenges Priyanka Gandhi has to faces as she joins Politics
‘Nari Shakti ‘ added in Oxford dictionary’s Hindi as word of Year for 2018