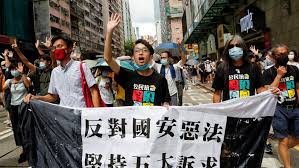 On 30 June 2020, just before the 23rd anniversary of Hong Kong’s handover to China- China imposed a new national security law over Hong Kong. The law titled as ‘The Law of the People’s Republic of China on Safeguarding National Security in the Hong Kong Special Administrative Region’ introduces four offences of secession, subversion, terrorist activities and collusion with a foreign country or with external elements to endanger national security into the Basic Law of the Hong Kong Special Administrative Region. Secession has been defined as any attempt to illegally separate Hong Kong from the People’s Republic of China (PRC); or surrender Hong Kong to a foreign country.

Subversion has been defined as overthrowing, threatening, or undermining the body of central power of the PRC or the body of power of the Hong Kong Special Administrative Region. Terrorist activities include sabotage of means of transport, transport facilities, electric power or gas facilities, other combustible or explosible facilities, and serious interruption or sabotage of electronic control systems to manage public services water, electric power, gas, transport, telecommunications and the internet. Collusion with a foreign country includes imposing sanctions or blockage, or engaging in other hostile activities against the Hong Kong Special Administrative Region or the People’s Republic of China and provoking unlawful means of hatred among Hong Kong residents towards Beijing city government. The law also establishes ‘Office for Safeguarding National Security’ which can take over jurisdiction from the city’s independent law courts if there is a threat to national security. Beijing implemented the law by including it in Annexure III of the Basic Law, which puts the law outside the limits of the region’s autonomy and thus being automatically put into effect.

A series of arrests of prominent leaders and supporters of pro-democracy camp followed with the law’s passing. Jimmy Lai, owner of the city’s popular newspaper- Apple Daily- and had been extremely critical of Beijing authorities and hardcore supporter of pro-democracy protests of 2019, was charged with “collusion with a foreign country or with external elements to endanger national security” under the new law for calling on overseas governments to sanction Hong Kong and China in response to the crackdown on pro-democracy activism in the city. Joshua Wong- leader of Umbrella Movement of 2014, Agnes Chow and Ivan Lam, have been charged for inciting a rally during last year’s pro-democracy protests and have been jailed under the new law. Four pro-democracy legislators were ousted and banned from running in the city’s legislative elections which were supposed to be held on 6th September 2020 for calling on the US to impose sanctions on Hong Kong officials. Fifteen other legislators in pro-democracy camp resigned en-masse to protest the decision taken by authorities in Beijing.

Chinese prosecutors have officially indicted 10 Hong Kong residents in December 2020 who were detained in Shenzhen to cross the border by boat to Taiwan illegally. Bao Choy Yuk-ling, a producer from public broadcaster RTHK was arrested for a mob attack report on 21 July 2019, in Yuen Long. Graduating students of CUHK displayed slogans like “Liberate Hong Kong”, “Revolution of our times” which also have been outlawed. Police are mulling over the action which is to be taken against students whose faces were covered under Guy Fawkes masks. All the above-mentioned actions taken by Hong Kong authorities with approval from Beijing highlights slow strangulation of protests.

Issues in the background
Dwelling deeper into why Hong Kong went into seven straight months of protests in 2019 which earned it the names of ‘city of protest’, ‘China’s rebel city’, and ‘city of dissent’. The unrelenting protests brought a recession into the city with its economy shrinking by 3.2 per cent in July-September 2019. The protests were against the extradition bill introduced by pro-Beijing Chief Executive of Hong Kong Carrie Lam Cheng Yuet-ngor which would have allowed criminals and suspects’ extradition to the mainland. The protests which saw two million people out on streets and even turned violent at later stages did not die down when Chief Executive agreed to suspend the bill. The protesters’ demands included officially withdrawing the bill and an investigation into police action for throwing tear gas on protests and universal suffrage. After much deliberation, Beijing consented to withdraw the bill but did not agree on the other two demands.

Why an extradition bill convulsed the city into one of the biggest protests the city witnessed so far? China had resumed Hong Kong’s sovereignty on 1 July 1997 under a Sino-British Joint Declaration of 1984. According to this declaration, Hong Kong was to be governed under ‘One Country, Two Systems’, which would ensure an independent judiciary, the rule of law, freedom of the press, and civil and political rights for the next fifty years is till 2047. The extradition bill was seen as an attempt to cut down on the political freedoms ensured till 2047. Hong Kong had experienced two significant protests earlier: one in 2003 wherein the city government had tried to introduce national security bill, and protests emerged over the same; the other in 2014, which is more popularly known as umbrella movement for universal suffrage. Each time the city went under protests, participation rates grew, became violent and lasted longer.

After witnessing the tumultuous protests in 2019, Beijing was not likely to maintain the status quo. Besides, the Basic Law, the city’s mini-constitution, requires Hong Kong to pass a national security law that Hong Kong authorities did not deliver. Beijing said the new security law brought in calm and stability in the city. Since imperial times, Beijing has been threatened by chaos, disorder and instability and sees instability as the root for political fragmentation and division. Beijing adheres to its imperial maxim of unity is instability. New Security Law brings instability if not unity. Hong Kong’s Return was a matter of national pride for China as it meant the beginning of the rejuvenation of the Chinese nation and overcoming its century of national shame and humiliation that had begun with giving Hong Kong away to the British Opium War of 1840. But protests of 2019 damaged national pride of China.

Perspectives in 2021
China may have succeeded in temporally nipping the protests in the bud. With the spread of the pandemic, protests have become weak with a ban on assembly of more than four people. Moreover, fatigue and economic distress may be other factors that brought down protests this year. And with the passing of the new security bill and all prominent leaders behind bars, Beijing has managed to instil a sense of fear among the city residents. Passing of the National Security Bill directly bypassing Hong Kong legislature invited international criticism. Britain termed passing of the law as ‘draconian’. US has imposed sanctions on Chief Executive Carrie Lam and other officials of the CCP. Clamping down of political freedoms of Hong Kong sets a bad example for Taiwan. Taiwan was to be reunified with the Chinese mainland under the same system of ‘One Country, Two Systems’; with the system fairing badly in Hong Kong itself, there is a little possibility that it would be successful for Taiwan. That leaves force as the only available option to be implemented for unification with Taiwan. Additionally, it was in Hong Kong is the main conduit through which exchanges with Taiwan are conducted. The passing of the law weakens the umbilical cord that connects the PRC with Taiwan.

China may have won its battle of reigning in the protests but may have lost the war. It lost the war because it forced calm on the city rather than bringing calm in the hearts of residents of the city. China has lost the confidence of Hong Kongers. A sense of injustice and despondency looms large over Hong Kong. Hong Kongers may have temporally given in to the present situation, but going by its history, it is unlikely that they have accepted defeat. The city may see waves of protest when the time would be ripe as the seeds of protests are still intact in Hong Kongers.

PhD scholar at the Department of East Asian Studies, University of Delhi.

Thailand: For the pro-democracy protests, it is a long march ahead
Brexit: A year of the UK-EU transition talks and finally, a Deal
Comment