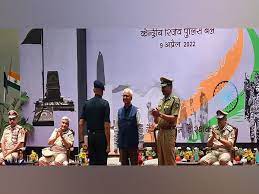 NEW DELHI: Home Secretary Ajay Kumar Bhalla on Saturday presented medals to the paramilitary personnel on the occasion of the 57th CRPF Valour Day for their courage in the line of duty during operations in Jammu and Kashmir and against Left Wing extremism and other areas in the country.

Bhalla also credited them for the revival of tourism in the valley. The Central Reserve Police Force (CRPF) celebrated ‘Shaurya Diwas’ today by honoring the officials, personnel, and relatives of martyrs during a function at CRPF Institute in Vasant Kunj.

Several other officers and jawans were presented with gallantry awards and certificates on the occasion. Shaurya Diwas remained suspended for the last two years due to the Covid-19 pandemic.

Addressing CRPF personnel, Bhalla said, “We get most of the demand for CRPF from States for deployment because CRPF has expertise in maintaining law and order. And it makes it very useful for us.”

He added that CRPF along with manpower also uses technology to maintain peace like drones in LWE areas. “We have guns along with modern technology. Basically, CRPF is a self Contained Force. Terror activities have been curbed down because of CRPF efforts,” he added.

He exuded confidence in the successful completion of the scheduled Amarnath Yatra “because of the CRPF efforts”. “CRPF has developed short notice logistics for frequent movement. CRPF personnel live in harsh conditions like sometimes in schools but they never complained,” Bhalla said. (ANI)

Saudi Arabia sets limit of one million Hajj pilgrims this year
13 people arrested for raising sloganeering inside Jamia Masjid Srinagar, PSA dossiers of all these accused are being prepared: Police
Comment