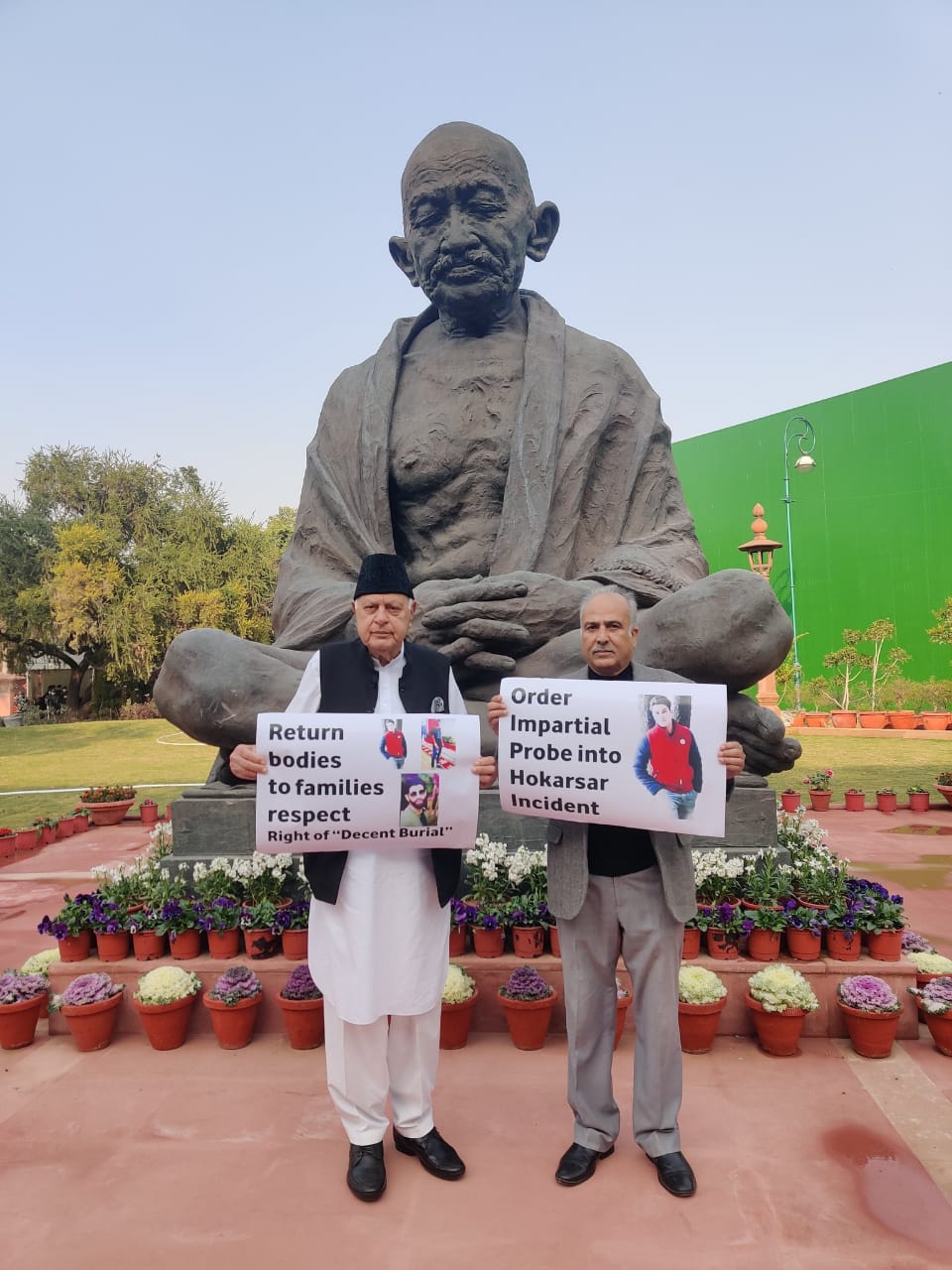 Srinagar, Feb 10: National Conference leaders Wednesday protested outside Parliament in New Delhi and demanded an impartial probe into the Hokersar, Srinagar encounter saying that the slain in Shopain fake encounter were proven innocent after “declaring them top commanders.”

NC MP’s Dr Farooq Abdullah and (Rtd) Justice Hasnain Masoodi staged a silent sit in outside the Parliament demanding an impartial and independent probe into the Hokersar incident where three youth were killed, whom security forces declared as militants.

Talking exclusively to the news agency, Justice Hasnain Masoodi said that an impartial probe must be initiated into the Hokersar, Srinagar encounter saying that Shopian fake encounter was proven through investigation. “We demand that the bodies of the slain killed in Hokersar encounter should be handed over to their families,” he said.

Justice Masoodi said that there must be an impartial probe since the sentiments have been hurt.

“Under the national and international humanitarian laws, there is a right to a decent burial as a fundamental right with one (slain’s) own family and relatives organizing the funeral under religious obligations,” he said.  “We have intimated the Defence and Home Minister within the house and demanded an impartial probe like the one held in Shopian gunfight case. We have told them not to disrupt the maintained belief.”

Masoodi said that in the Parliament they informed the house that Hokersar encounter was  “shrouded and suspicious.”  “We told the House that in case of Shopian fake encounter, security forces had claimed killing top three commanders, who later turned out to be civilians from the nomadic community of Rajouri district,” he said.

“In Hokersar encounter, a family has lost a juvenile son under mysterious and suspicious circumstances. His body should be handed over to his parents,” Masoodi said.

Masoodi also said that registering a case against the family demanding the body of the slain shows the confusion. “They (authorities) must step into the shoes of the affected family and try to understand their pain,” he said.

He said it was NC that raised concerns related to Shopian encounter in Parliament displaying the pictures of the victims. “We got the job done that time and we are hopeful to see an impartial probe into the Hokersar encounter as well,” Masoodi said.

Notably, three south Kashmir based boys were killed at Hokersar, Srinagar on December 30, last year with the family members pleading the innocence of their wards stating “their children were not militants and that bodies be handed over to them.” The police have said it will produce evidence of them having connections with militants soon.