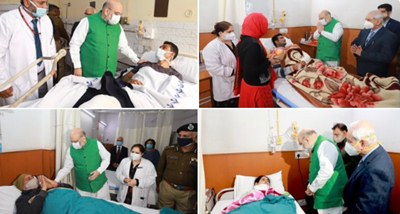 Home Minister Amit Shah visited hospitals to enquire about the health of brave policemen of the Delhi Police who were injured in the violence during the tractor rally on the Republic Day. He went to Sushruta Trauma Center and Tirathram Hospital in the capital and enquired about the health of injured policemen.

In a tweet, Mr Shah said, he met the policemen of Delhi Police and wished them a speedy recovery. He said, the entire nation is proud of the example of bravery and restraint in the face of the violence that took place on Republic Day. The Home Minister also met the families of the injured policemen.

Violence and sabotage was carried out and policemen were also attacked by the people involved in the rally at several places in Delhi, including at the historic Red Fort. Several Delhi Police officers and personnel were injured in the incidents.

Beating Retreat, marking culmination of Republic Day celebrations, to be held today at Vijay Chowk
CBSE datesheet for 10th and 12th exams to be announced on Feb 2
Comment