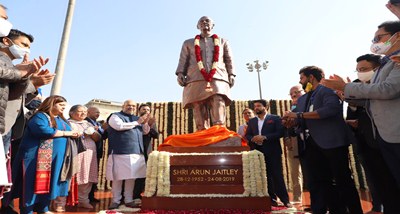 Home Minister Amit Shah today unveiled a statue of Arun Jaitley and paid tributes to him at the Arun Jaitley Stadium, formerly known as the Feroz Shah Kotla Stadium, on the occasion of the late minister’s 68th birth anniversary.

Mr Shah said Arun Jaitley was an outstanding parliamentarian and excelled in many fields.

Mr Shah said, it was a matter of great honour and joy for him that he is at Ferozshah Kotla Stadium, which has witnessed some historic cricket moments in the past.

Panun Kashmir reiterates demand for separate homeland in valley
From militancy to mainstream: J&K youths give up terror path for variety of reasons
Comment