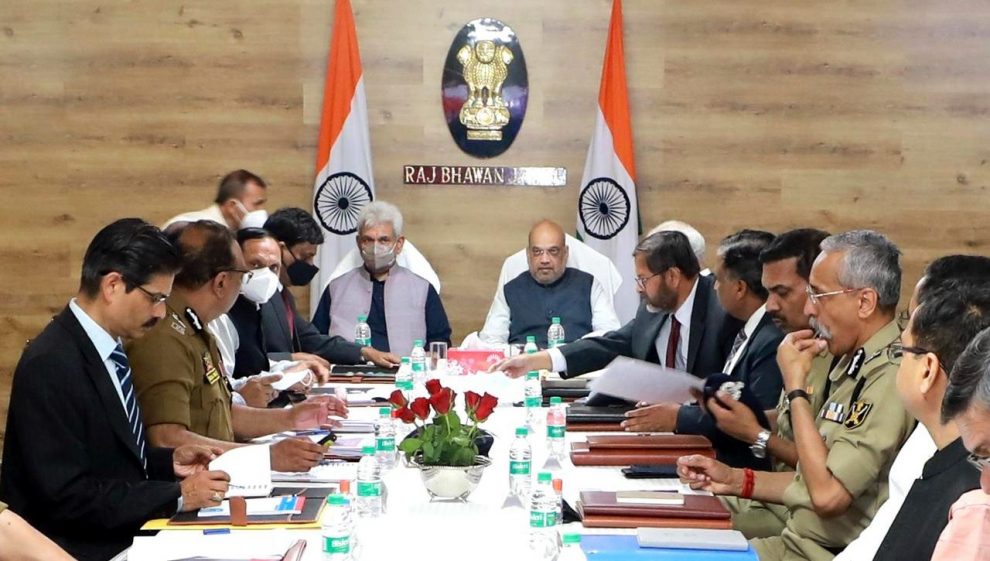 JAMMU: The Union Home Minister Amit Shah chaired a security review meeting in Jammu where he reiterated his commitment for “zero tolerance for terrorism” and directed the top security brass to speed up anti-militancy operations to wipe out militancy from the region to make peace a permanent feature.

Shah chaired the security meeting at Raj Bhawan Jammu. The meeting was co-chaired by J&K LG Manoj Sinha. “All top security officials were present in the meeting who gave a detailed presentation to Home Minister about different security aspects of J&K including the success achieved on anti-militancy front,” sources privy to the meeting said.

He directed the officers of various security wings to step up anti-militancy operations in J&K to wipe out militancy from the UT so that peace is made a permanent feature. The Home Minister, however, expressed his satisfaction over the declining graph of militants in J&K and praised the security forces including police, army and CRPF for successful operations.

They said that during the meeting, the Union Home Minister appreciated the improvement in the security situation, reduction in militancy incidents from 417 in 2018 to 229 in 2021 and decrease in the number of security forces personnel martyred from 91 in 2018 to 42 in 2021.

“Shah emphasized on proactive operations against militants and denying them safe haven or financial support,” the sources said, adding that “he directed the security forces and police to ensure real-time coordination for effective counter-terrorism operations and monitoring activities of militants from jails.”

“Shah told the meeting that the security grid should be further strengthened to ensure zero cross-border infiltration and to eliminate terrorism completely in order to achieve Prime Minister Narendra Modi’s vision of a peaceful and prosperous Jammu and Kashmir,” the sources said.

Earlier in the day, the Union Home Minister joined CRPF’s celebration for its Raising Day in Jammu.

He said that whenever India’s history is written, the supreme sacrifice of 2,340 CRPF personnel will be written in golden letters. “I want to say to the families of those who have received posthumous honours that the martyrdom of your son, husband, or brother will never go in vain and the nation will remember their martyrdom for ages to come—(KNO)