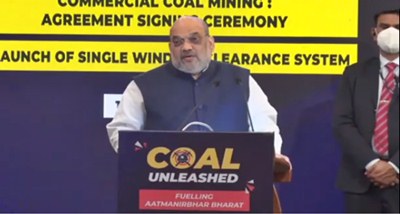 Union Home Minister Amit Shah said that Coal Sector has the potential to be the biggest contributor towards Prime Minister Narendra Modi’s vision of making India a 5 trillion dollar economy by 2024.

Speaking at the launch of single window clearing system for coal mines in the country today, Mr. Shah said, the production of coal in the country has increased manifold in the last six years. He asserted that the sector also has the potential to boost Prime Minister’s idea of Atmanirbhar Bharat.

Making reference to series of path breaking reforms introduced by the NDA government in last six years, Mr. Shah affirmed that the impediments in the coal sector which included transparency and ease of business have been addressed. He said, the policy of commercial mining will provide additional financial impetus to states and will help create nearly 70 thousand jobs. Mr. Shah urged the mining companies to spur coal production so that the dependency on coal imports could be reduced further and energy demands of emerging sectors could be met.

Speaking on the occasion, Union Coal Minister Pralhad Joshi lauded the historic reforms of the centre and said that the single window clearance system in mining will drastically reduce the time taken to grant approvals in the sector. He said, the centre is committed towards ease of doing business and asserted that self dependency in the coal sector will provide a remarkable thrust to the idea of self reliant India.