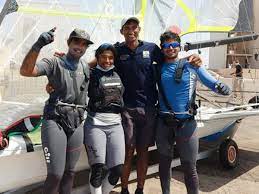 Four sailors created history from India by qualifying for this year’s Tokyo Olympics. Vishnu Saravanan and the pair of Ganapathy Chengappa and Varun Thakkar made the cut during the ongoing Asian Qualifiers in Oman.

This was after Nethra Kumanan, a day before in another Asian Olympic qualifier, became the first Indian woman sailor to qualify in the laser radial event in the Mussanah Open Championship.

However, bad news has hit the weightlifting arena where 2019 Commonwealth Championship gold medallist in the 64-kg category, Rakhi Halder, failed an out-of-competition dope test just ahead of the Olympic qualifying event next week.