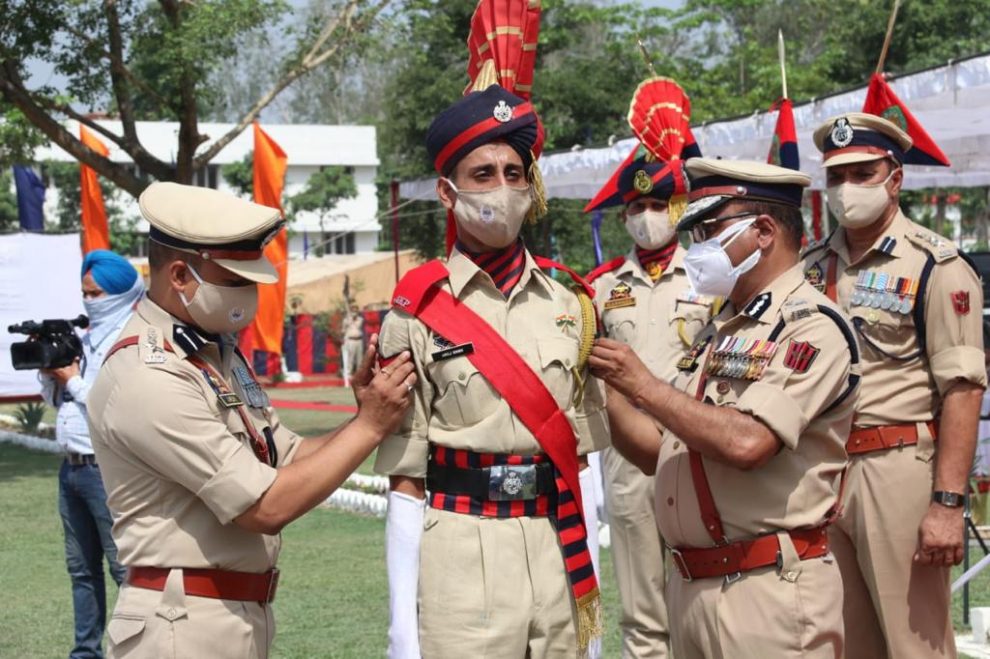 Militants involved in the killing of our martyrs will not be spared: Shri Dilbag Singh

SRINAGAR, 02 July: Terrorists involved in the martyrdom of our personnel will not be spared and Jammu and Kashmir Police along with other security forces are working for peaceful environment in the UT.

This was stated by the Director-General of Police J&K Shri Dilbag Singh while addressing the Passing out Parade of 02 Probationary DySsP, 28 PSIs and 508 recruit constables of 27th Basic Recruitment Training Course batch at SPS Police Training School Kathua, who have successfully undergone basic training courses.

DGP, J&K who was the chief guest on the occasion inspected the parade and took salute.

Congratulating the trainee officers and personnel for completing successfully the basic training course the DGP on behalf of J&K Police Pariwar welcomed all the new comers to the family of Jammu and Kashmir Police. ‘’I trust & believe that you becoming a part of J&K Police will boost the spirit and provide more power to the already best acknowledged force of the country’’, the DGP said.

He said that the trainees of today’s parade are of three different batches, 02 probationary DySsP and 28 PSIs have completed their training at Sher-e-Kashmir Police Academy and have been shifted to SPS Kathua for their Passing out Parade. He said that these trainees have the privilege of serving the civil society and people prior to completing their training due to the outbreak of COVID Pandemic. The experience gained in advance will help them in doing their duties now professionally he added. He expressed the hope that pass outs will perform well and come upto the expected standards in discharge of their duties

The DGP congratulated the pass out for exhibiting excellent drill and discipline. He congratulated the Principal SPS Police Training School Kathua, Shri Arun Gupta, Vice Principal, drill instructors and other support staff of the training institution for organising excellent passing out parade. He complemented Principal for handling and managing the three different batches for today’s Passing Out parade.

The DGP said that passing out parade is the most emotional part for all trainees as now all of you will be posted at different places and this passing out parade shows the spirit of oneness and bonding between all trainees achieved during the training period. ‘I wish that this spirit, bonding and working shoulder to shoulder shown during the training will be carried forward at your place of postings’, the DGP added.

The DGP said that history of Jammu and Kashmir Police has been written in golden letters and is one of the best forces in the country. He said that at every forum whether UT or national whenever the J&K Police is talked about especially during those meetings presided over by the Hon’ble Prime Minister of India or Home Minister of India the J&K Police is praised and lauded for its dedication, work, bravery and for the scarifies of our martyrs given during the last 30 years. He complemented all members of the J&K Police and added that J&K Police is known for its good work in the country. He said that the good work done will be carried forward and each of us will give our best in future for the peace of Jammu and Kashmir. He expressed gratitude to Hon’ble Prime Minister of India and Hon’ble Home Minister of India and Hon’ble Lt.Governor for appretiating the work of J&K Police at every forum. He thanked Hon’ble Lt. Governor of J&K Shri Manoj Sinha and his administration for taking various measures for the betterment of Police force.

On the occasion the DGP remembered and paid homage to all the martyrs of Jammu and Kashmir and said that it is because of the sacrifices of our brave martyrs that J&K Police is known as one of best forces in the country. Recalling the recent the martyrdom of Inspector Parvaiz Ahmad Dar and SPO Fayaz Ahmad, the DGP said that those terrorists involved in their killings will not be spared and added that Jammu and Kashmir Police along with CAPF, Army is taking every positive step to root out terrorism from the UT of Jammu and Kashmir .

He expressed his sympathies with the families of martyrs and said that J&K Police is always with them. He said that various welfare measures are in place for the welfare of the families of martyrs and We will continue to take steps in future also for their welfare.
He said that about Rs 100 cr has been spent on different welfare schemes during last one year or so and these funds have been mobilised by our own contributions.
Referring to the promotion avenues of the Police officers and personnel including SPOs every step is being taken. He said that during the current year around 2000 officials have been promoted and numbers of SPOs have been converted as followers and constables for their good work. Giving information about the recruitment of 04 battalions which includes 02 women battalions and 02 border battalions the DGP said that the recruitment process of these battalions is in the final stage. He expressed hope that soon these new recruits will be welcomed in the training centers across J&K.

The DGP expressed gratitude to the members of civil society, media and all those who provide their support and appreciate the work of Jammu and Kashmir Police and said that their love and appreciation boosts our morale in performing our duties each day.

In his address, Principle SPS Police Training School, Kathua, welcomed the chief guest and other dignitaries and thanked them for gracing the event. He threw light on the different training methods imparted to the trainees. He also spoke regarding the performance of the training center.