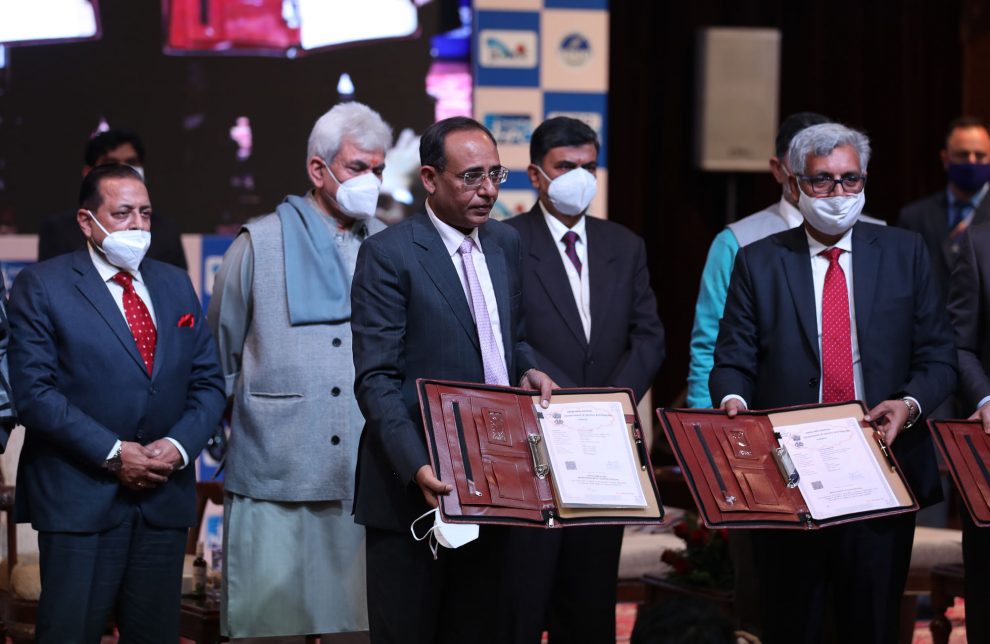 J&K taking a quantum leap from power deficit to power surplus in next four years: LG

Mega Hydro Power Projects will not only generate employment but would also increase the per capita income of J&K: Dr Jitendra Singh

JAMMU, JANUARY 03: In a historic moment for energy sufficiency in Jammu and Kashmir, Memorandums of Understanding (MoUs) were today signed for implementation of much awaited Mega Hydro Power projects, including 850 MW Ratle HEP and 930 MW Kirthai-II HEP, besides execution of long pending Sawalkot HEP (1856 MW), Uri-I (Stage-II) (240 MW) and Dulhasti (Stage-II) (258 MW), to make J&K a power surplus region in the country.

The occasion also witnessed inauguration of as many as 19 important projects of PDD aimed at greater generation, efficient transmission and better distribution of power supply in J&K during the Mega inauguration ceremony.

Speaking on the occasion, the Union Minister of State (Independent Charge) for Ministry of Power, New & Renewable Energy, Shri Raj Kumar Singh assured extending every support of the GoI to the J&K Government for various reforms in the power sector.

Hydro electric potential successfully ushered the era of development in various states including Sikkim & Himachal Pradesh. J&K should replicate the model. According to national average, electricity in rural areas is 20 hrs and in urban areas is 22-23 hrs. J&K too will reach the milestone if the pace of development is kept the same, he added.

Locals will be trained and given employment in NHPC ventures; besides NHPC will see for development of small hydro projects also, he maintained. We have to do our bit of duty to see electricity reaching every household 24×7, said the Union MoS.

During his address, the Lt Governor, Manoj Sinha observed that the MoUs signed today would attract investments worth Rs 35,000 crore for Jammu & Kashmir power sector and ensuring the region’s energy security and 24-hour power supply to the people of J&K.

“J&K is taking a quantum leap from being power deficit to becoming power surplus in the next four years. For uninterrupted power supply, this is the most significant move by the J&K government”, said the Lt Governor.

As per the provisions of these MoUs, the projects will be handed over back to Jammu and Kashmir after 40 years of commercial operation which was not in case of earlier projects allotted to NHPC Limited, he remarked.

Speaking on tapping the full potential of hydro energy, the Lt Governor observed that the vision of the Government is to effectively harness hydro energy resources of J&K with a goal to double the energy generation by 2024 and also to prepare a strategy for efficiency through policies, monitoring mechanism to ensure energy security for economic and social benefits.

Hydro electricity would be a major contributor to the world’s energy security in view of the global shift towards sustainable energy and reduction of carbon emissions. Our efforts are steering Jammu & Kashmir towards its energy sufficient and empowered future, he added.

The Lt Governor said that the numerous hydro resources of Jammu & Kashmir are capable of generating 14,867 MW power but the potential had not been fully exploited, and only 3504 MW power was being generated till now. The works started now will ensure that another 3498 MW power is generated in the next three to four years.

The potential which was achieved in 70 years would now be doubled within the next four years only, maintained the Lt Governor.

J&K’s journey from a power deficit to a power surplus region can only be realized with vision and planning. Entire overhaul is being made possible with the support of the Central Government without any expenditure by the UT administration, the Lt Governor remarked.

Out of the two agreements, the NHPC would work in association with the administration at the first and, the languishing Sawalkot project would be handed over to NHPC for completion under the second. The project has been perpetually postponed since its conception in 1984 and was expected to generate 1856 MW power, he added.

Underscoring the significance of clean, affordable and reliable energy as key factors for growth of industries, businesses and society, the Lt Governor said that the UT Government is working on environmentally sustainable solar plants to augment renewable energy generation while reviving small hydro projects pending for a long time.

Jammu & Kashmir was deliberately prevented from attracting investments and despite having abundant potential of power generation; its energy needs were not addressed. With the execution of new mega power projects, a number of other employment avenues would be generated for the locals. In addition to power generation, strengthening its distribution and transmission infrastructure would also receive our equal efforts, the Lt Governor maintained.

Highlighting various measures taken by the Government to streamline power supply across the UT, the Lt Governor said that during the ‘winter preparation’ meeting conducted last year, efforts were made to ensure that except for the scheduled power cuts, the public gets regular power supply. Any disruption in power supply was directed to be rectified within minimum time and a customer care centre was also set up for the purpose in Kashmir division last month. A similar centre was also launched in Jammu division today.

Replacement of faulty transformers has been a serious issue and therefore, a deadline of 24 hours has been set, in case of urban areas, and 48 hours in case of villages, within which the transformers are to be replaced. Although, we are supplying 15% more power in comparison to last year, still a lot needs to be done to achieve the desired results, he maintained.

The Lt Governor expressed gratitude towards the Union Minister of State, Sh. RK Singh for promotion of clean and sustainable power resources. A number of works on renewable power resources are being executed under the able guidance of Hon’ble Prime Minister, Sh. Narendra Modi nationwide. India is fast emerging as a hub of renewable energy resources. To fulfill the Hon’ble Prime Minister’s motto of One World, One Sun, One Grid, we would also work on solar projects in J&K and help improve the lives of its people, observed the Lt Governor.

The quantum leap, from being power deficit to power surplus, being taken by the UT administration in power generation is dedicated to the public. I also assure that we remain steadfast in resolution of power woes of the people of Jammu & Kashmir, said the Lt Governor.

The Lt Governor said that the year 2021 has been given a stupendous start as the UT administration signed various MoUs for the development of Jammu & Kashmir, which include MoU with NAFED to bring reforms in the horticulture sector, for high density plantations, cold storage cluster, market linkage and GI tagging of local products including the announcement of Rs 2200 cr investment in the UT by NAFED.

MoS PMO, Dr Jitendra Singh, in his address, said that the Mega Hydro Power Projects will not only generate employment but would increase the per capita income of J&K. He dedicated all the inaugurated projects to the common people of J&K.

All issues inherited from past regimes would be addressed meritoriously taking care of all the stakeholders. J&K will see a new dawn of energy sufficiency and thereby development in all sectors, he added.

In his welcome address, Principal Secretary, Power Development Department, Rohit Kansal gave an overview of the hydropower potential of J&K. He said that the initiative will add more than 3500 MW of energy and will thus help J&K become power surplus UT. We have a natural advantage in hydropower, so we need to exploit it for the benefit of the people, he added.

Screening of film on Hydropower in J&K was one of the main highlights of the event. A video on various activities in the Power Sector in J&K by PDD was also screened on the occasion.

Prominent among others, Former Ministers, ex-Legislators; Administrative Secretaries; Senior Officers of Civil and Police Administration and other senior officers of Government of India, J&K and CPSUs like NHPC, REC & PGCIL were also present.