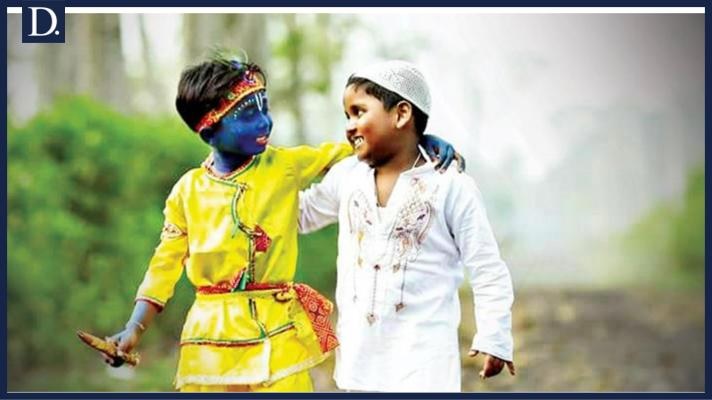 Recent decades have witnessed the emergence and growing presence of the virulently anti-Sufi Ahl-i Hadith movement in the Jammu region, although the sect has only a marginal presence. The Ahl-i Hadith believe that Sufism is wholly ‘anti-Islamic’, claiming that it was a later development that has no sanction in the practice of the Prophet Muhammad. As many Ahl-i Hadith see it, Sufism is a result of a ‘conspiracy’ allegedly hatched by the ‘enemies of Islam’ to destroy Islam from within, to lead Muslims away from the path of the Prophet and, in particular, to rob them of the spirit of militant jihad by preaching pacifism. Strict literalists, the Ahl-i Hadith insist that Muslims should literally follow every word contained in the Qur’an and in the corpus of Prophetic traditions or Hadith.

H is a maulvi attached to an Ahl-i Hadith mosque in a township in the Jammu province. I met him at a tea-shop in Jammu, where I found him speaking to a group of villagers against the practice of visiting the shrines of the saints. ‘This is pure idolatry, which Muslims have borrowed from the Hindus’, he forcefully declaims, arguing that the punishment for this would be burning in the fires of hell. ‘That is what is written in the Qur’an and Hadith’, he announces when one listener objects to his statement. Evidently, the villagers are not enthused by his lecture, and they soon depart.

Left alone with H, I talk with him about the Ahl-i Hadith and its work in the Jammu region. ‘We are here to teach true Islam’, he tells me. He claims that the other Muslim groups, such as the Barelvis and the Deobandis are not ‘true Muslims’ at all. ‘They must be brought to the fold of genuine monotheism’, he passionately insists, and, clearly, that is a task that H has set for himself. As for the Shi’as and the Qadianis, they are, he tells me in no uncertain terms, ‘the worst of the apostates, agents of the despicable Jews’. Like non-Muslims in general, their adherents, too, he assures me, would be punished in hell. He does not seem to think that by its vehement propaganda against the other Muslim groups Ahl-i Hadith is actually setting Muslims against each other. ‘They aren’t genuine Muslims at all’, he retorts when I ask him this, ‘so how can we be accused of dividing the Muslim ummah?’.

The Ahl-i Hadith are notorious for their quarrelsomeness but even by general Ahl-i Hadith standards H strikes me as unusually cantankerous and judgmental. I am not surprised, then, when I discover his sympathies for the radical Islamist Lashkar-i Tayyeba, which is associated with the Ahl-I Hadith in Pakistan and which is perhaps the most formidable militant group active in Kashmir today. H brushes aside my question about the killings of innocent civilians, Hindus and Muslims, by Lashkar fighters. ‘That is all Indian media propaganda’, he declares. ‘The Lashkar activists are motivated solely by Islam and the desire for the hereafter and they conduct their warfare in accordance with the rules of the Prophet’. ‘Not a single innocent person has been killed by the Lashkar’, he argues, flatly denying my claims to the contrary. He, however, admits that some people have taken up the gun to settle personal scores or to loot, and have killed innocent people, and that they ‘wrongly’ claim to be members of the Lashkar. The Lashkar is not to blame for their crimes, he pleads.

I, of course, disagree, and point to a report in that very day’s newspaper that speaks of Lashkar activists in Doda slitting the throat of a Muslim farmer for allegedly being a government informer. ‘No, no’, H angrily replies, ‘this is all nonsense’. ‘Why are you asking me all these questions?’, he asks sternly. ‘Are you a government agent or what?’. I reply that I am just a journalist. I, however, think it wise to let him proceed, for I am not out to convert him (much as I wish to) but, rather, to learn about how he views the Kashmir conflict.

H makes no bones about his opposition to Indian rule in Kashmir. ‘Why blame only the militants for what is happening?, he asks. He points out that ‘since 1947 there have been several thousand communal riots in India, in which Muslims have been the worst sufferers, having lost thousands upon thousands of lives’. I nod my head in agreement. The continued injustice towards Muslims in India has convinced many Kashmiri Muslims to feel that they have no future in this country, he says—an obvious enough point, in a sense. Since the vast majority of the Kashmiris are Muslims, he argues, many of them believe that it is ‘but natural’ that Kashmir should be part of Pakistan.

H hurriedly adds that that is not necessarily his own personal opinion. He smiles but says nothing when I point out that the Lashkar website describes the conflict in Kashmir as a legitimate jihad, the ‘Battle of India’ (ghazva-i hind), of which the Prophet had allegedly predicted that Muslims who participated in it would go to heaven.

Although he does not conceal his sympathies for the Lashkar, it appears that H does not agree with them entirely. He does not concur, or so he says, with the Lashkar’s claim that the conflict in Kashmir is a cosmic struggle between good and evil, Islam and infidelity. ‘It is a political, and not a religious issue’, he stresses, pointing out that in contrast to the Lashkar, several Indian Ahl-i Hadith leaders have also argued on similar lines. At the same time he refuses to recognise the obvious fact that the Lashkar is vociferously anti-Hindu. ‘It is not against the Hindus at all’, he seeks to convince me. ‘You’ve been reading all the wrong newspapers, because in a truly Islamic state religious minorities will be allowed to practice their faiths’. Had the Lashkar seen all Hindus as enemies, he claims, there would have been no Hindus left in Kashmir. ‘In every street in Kashmir you have Bihari and Bengali labourers. There’s a large and prosperous Sikh community in Kashmir’, he says.

But what about the Kashmiri Pundits, I ask him. ‘That is a different issue altogether’, he replies. ‘They were the elites of Kashmiri society, and Jagmohan forced them to flee’. They were, so he claims, ‘tempted’ by ‘generous offers of government assistance’ if they left the Valley, in order to give the militant movement a ‘communal colour’ and ‘a bad name’. He refuses to recognise the obvious sufferings of many Pandits who had been forced out of their homes. ‘No, in fact they’ve prospered after leaving’, he counters. ‘They now occupy high posts in Delhi and Bombay and even abroad’.

I realise it is futile to continue that line of inquiry for he simply refuses to find any merit in my arguments. I ask him, instead, if he really believes that the Hindus and other non-Muslim minorities would ever agree to join Pakistan or to live in an independent Muslim-dominated state. ‘ Why not?’, he naively replies, ‘They will find that Pakistan is a better option for them than India’. After all, he claims, in Pakistan the Hindus are ‘very rich, even richer than the Hindu seths in Jammu’.

I cannot not help express my disagreement somewhat angrily. ‘That’s totally wrong’, I insist. ‘The vast majority of the Pakistani Hindus are landless Dalits in Sind’.

‘You’ve never been to Pakistan’, H retorts at once, ‘so how would you know?’. He then launches on a harangue of the Jews and Christians, who, he claims, have been plotting to blot out Islam from the face of the earth ever since the time of the Prophet Muhammad. In contrast to them, he says, the Hindus are not, as an entire community, ‘enemies of Islam’. Hence, it is perfectly possible for them to live together in the same country. They would be free to practice their own religions, although, he says, Muslims would be free to preach Islam among them, because, he insists, ‘Islam is the only route to salvation in this world and the next’. Ideally, he says, Kashmir should be an independent country, ‘like Nepal’, with open borders, enjoying the same legal status as it did under the Dogra rulers. He does not reply when I ask him what sort of state this would be. He probably believes it should be an Islamic one, ruled strictly in accordance with the Ahl-i Hadith understanding of the shari‘ah, which is almost identical with that of the Wahhabis of Saudi Arabia.

I am saved from H’s continued bantering by my friend Iqbal, who suddenly appears outside the tea shop where we have been talking. He has come to take me for the Thursday evening gathering at a Sufi shrine. Just to be provocative I tell H where I am heading. He curls up his nose in disgust. ‘My brother’, he says to me, ‘there’s no use going to such dens of idol-worship. Become a Musalman and follow the path of the Prophet. Nothing else can save you’.

I force on a smile, while Iqbal, faithful devotee of the Sufis, winces at H in anger.

This is Part VI of a VIII Part series by Yoginder Sikand, first published in 2010