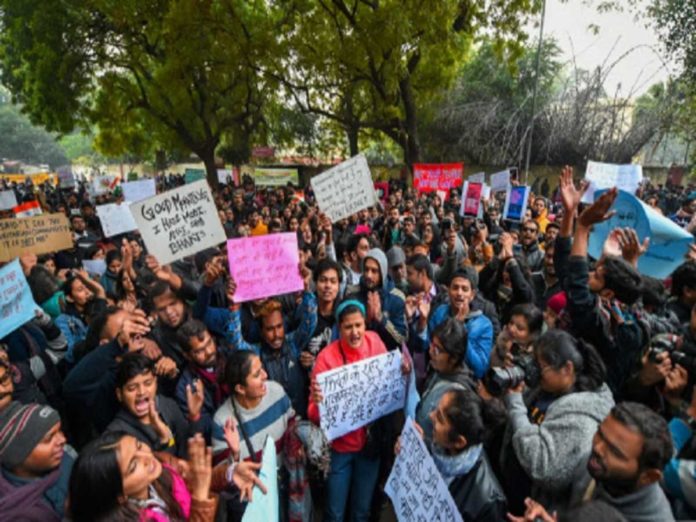 People from the north-east gathered at Jantar Mantar here on Sunday, claiming that the protests against the Citizenship Amendment Act (CAA) were given a Hindu-Muslim colour and the voices from the region fighting for the rights of indigenous people ignored.

The protesters, including students and civil society members, said they were deeply hurt and distressed by the police “brutality” on those against the CAA, but “our protest is about our rights”.”We will not let others hijack our agenda. We are here to speak about our people. You cannot always ask one to take more people,” Tripura’s royal scion Pradyot Deb Barman, who is also present there, said.

“We respect their protest. We sympathise with the students of Jamia Millia Islamia and Aligarh Muslim University. It does not matter if you are a Hindu or a Muslim, the CAA is going to trigger a massive demographic change in the north-east,” a protester said.”I am sure if Muslims are included in the list of communities to be granted citizenship through CAA, they will not protest. But we will protest anyway,” she added.

Ningthem Meitei, 23, said the movement against the CAA started from Assam, but “it has been hijacked in a way. We are not being represented”.”We condemn the violence against students and unarmed protesters. We stand with all those protesting against the CAA. But our protest is also about the demographic challenges confronting us,” he said.

For the people of the north-east, the issue of CAA goes beyond Hindus and Muslims, Denis (25) said.”In Tripura, indigenous people account for only 30 per cent of the population. People from other regions and neighbouring countries are migrating to the state,” he said.
The protesters also demanded that police release RTI activist Akhil Gogoi and others arrested for demonstrating against the CAA.