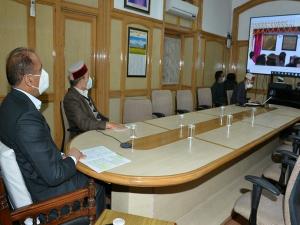 The Chief Minister inaugurated the Science Laboratory building of Government Senior Secondary School Nehri in the area constructed by spending an amount of Rs 1.15 crore.

He laid the foundation stone of Krangal-Kindar road to be constructed at a cost of Rs 13.73 crores under Pradhan Mantri Gram Sadak Yojana (PMGSY), as well as of ITI building Nehri and to be built by spending an amount of Rs 7.94 crores and Rs 1.58 crore respectively.

Addressing the virtual rally from Shimla, Chief Minister said that all the developmental projects foundation stone of which was laid by him today would be completed within the stipulated time period.

Taking to Twitter, the Chief Minister wrote, “We will not stop the pace of development of Himachal Pradesh. Our government is doing effective work with a view to taking the state to new heights. Today, we held a meeting with the officials of the concerned departments for the development and expansion of airports in the state and prepared the forthcoming framework.”

Due to the ongoing pandemic, many state projects were put on hold and the Chief Minister had addressed these issues last week.

“COVID-19 was not only a global pandemic and public health crisis, it has also severely affected the global economy and financial markets. Significant reductions in income, rise in unemployment, and disruptions in manufacturing industries were among the few consequences of the disease,” Thakur had said.