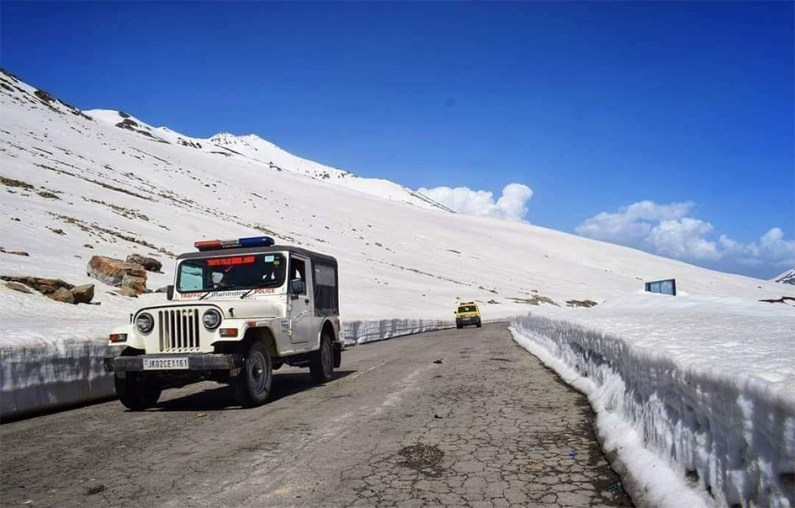 Jammu, Jan 19: Jammu based traders Tuesday said that the economy of both divisions (Kashmir and Jammu) is interdependent and the Srinagar-Jammu national highway closure casts a shadow on the business of both the regions. They said that frequent closure of the highway leads to huge business losses on both sides of the Jawahar tunnel.

The highway remained closed for a week from January 9 to January 16 as a bridge and portion of a road caved in at Kela Morh in Ramban district. Hundreds of trucks and private vehicles were stranded on the highway and Kashmir was almost on the verge of the shortage of essential commodities.

Several Jammu traders while talking to the news agency—Kashmir News Observer (KNO), said that the highway closure is a decades-old mystery and not only the stranded people suffer the economy in Jammu gets hit as well. “The flow of goods and import-export particularly gets halted which adds to the losses of traders in both the divisions,” they said.

Senior trader and former president of Jammu Chamber of Commerce (JCCI), Rakesh Gupta said that both Kashmir and Jammu divisions are interdependent as far as business between the two regions is concerned and that the highway closure is a basic and big problem.

He said: ” High way closure leads to huge business losses to Kashmir as well as Jammu region. I won’t say only Jammu is suffering, both regions are suffering due to highway closure.”

Gupta said that not only in terms of the economy rather in terms of everything both the divisions are interdependent and suffering equally.

The highway blockade adds to the woes of truckers and drivers who get stuck in extreme cold temperatures on the highway which leads to the loss of goods being transported from Jammu to Kashmir, Gupta said.

He said that there has never been a permanent solution to such problems since the government takes it as a non-serious matter and remains confined to just repairing the damaged slots of the highway. “The government needs to take serious steps till the new highway is through,” he said.

He also said that the local traders do suffer highly in both divisions. “Amid the closure of the highway and air services the import and export naturally gets hit and there is no trade”, he said.

Govind, a shopkeeper in the main Bus stand, Jammu told KNO that undoubtedly the small class businessman also gets hit since the stranded passengers are very hesitant to buy items regularly and the people over a year have lost jobs and don’t prefer to shop more.

“There are shoppers across the markets but hardly anyone visits different shops including mine to buy different items and even many of the material is lying at my shop for several weeks now,” Govind said.

Rajesh Gupta, senior trader and the newly elected Chairman of Jammu Chamber of Commerce and Industries (JCCI), told KNO that both Jammu and Kashmir divisions suffer an equal share of losses during the highway blockade, and similarly, the transporters suffer heavy losses since the stock laden trucks get stuck halfway for many days.

“We have seen tucks laden with stock getting stuck for two weeks or more and the transporters from either of the division suffer loss be it Kashmir or Jammu”, he said.

He said that the stock sent from Jammu goes through various challenges as the stock has to reach the destination well on time and the delay itself is a loss.

About the local trades, the newly elected chairman said that the local traders in Jammu do suffer loss and unless there isn’t flow of stock and halt in traffic movement adds to the loss of transports since the set fair won’t be increased.