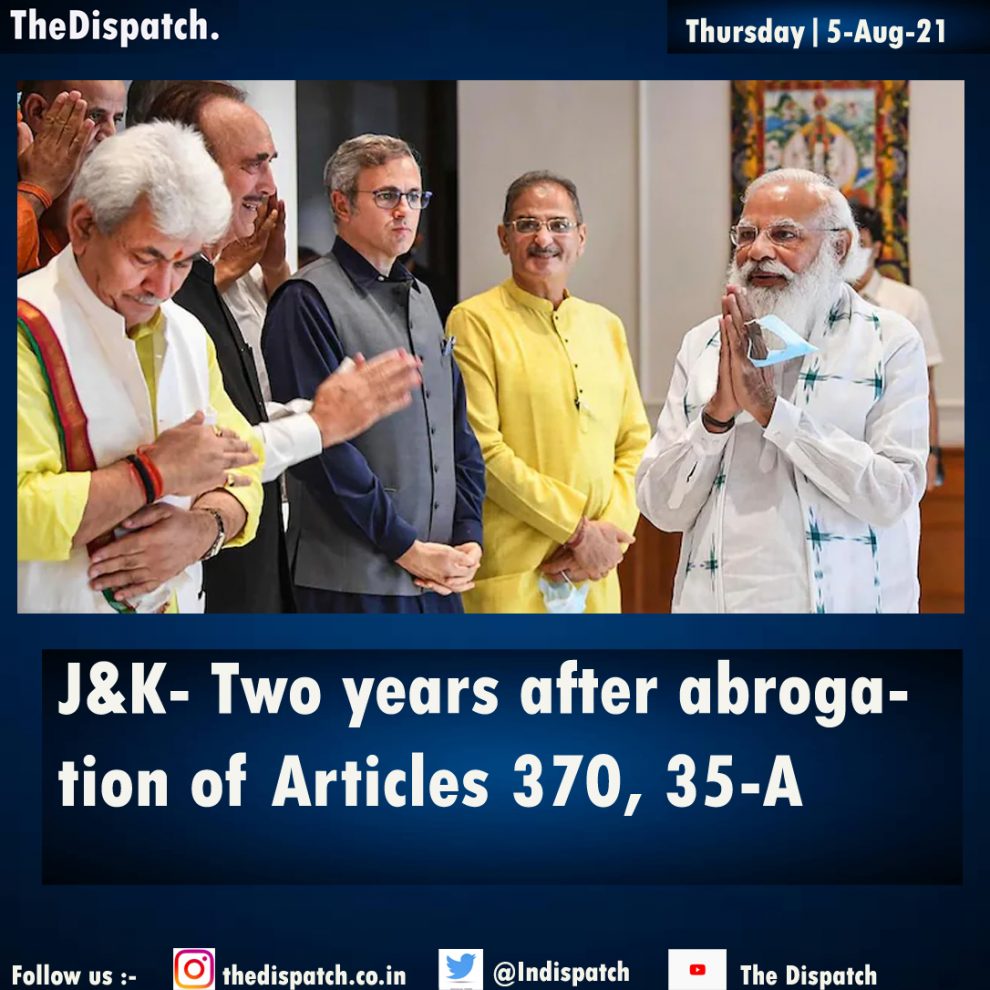 Jammu: On August 5, 2019, Articles 370 and 35(A) were nullified that gave the Jammu and Kashmir its special status and the mandate to define its domicile rules. The state was bifurcated into two Union territories of Jammu & Kashmir and Ladakh.

The historic move had led to the imposition of restrictions on several political leaders and activists in the Kashmir Valley.

Gradually, authorities lifted the curbs and released politicians under detention. The political parties in Jammu and Kashmir have vowed to continue their struggle for restoration of statehood.

Article 370 of the Constitution of India is described as a “temporary provision” that grants the state of Jammu and Kashmir a special autonomous status within the Indian union.

As a result of this status, the state of Jammu and Kashmir enacted its own Constitution, which was formally adopted by a Constituent Assembly on November 17, 1956, and entered into force on January 26, 1957.

In July 1952, an agreement was made between the then-prime minister of India, Jawaharlal Nehru, and the prime minister of Jammu and Kashmir, Sheikh Abdullah, which called for India’s citizenship law to be made applicable to the state and allowed the state to regulate the rights and privileges of its own permanent residents. This agreement was codified by the president of India, who issued the Constitution (Application to Jammu and Kashmir) Order, 1954 (made pursuant to article 370(1) of the Constitution), which added article 35A to the Indian Constitution.

Abrogation of Article 370 and Article 35A

On August 5 2019, Rajya Sabha passed a Statutory Resolution recommending that the President of India abrogate most of article 370 pursuant to article 370(3). The next day, on August 6, the president implemented the resolution and revoked Jammu and Kashmir’s special status through Presidential Order C.O. 273.

During the same period, the Parliament of India also passed the Jammu and Kashmir Reorganisation Act, 2019. It passed the upper house on August 5 and the lower house the next day and received presidential assent on August 9, 2019.

The government claims that the revocation was carried out for the “economic development and growth” of the state.

Aiming to avert unrest in the state and prevent protests, the government subsequently cut landline, mobile, and internet communications, and political leaders and activists were arrested under the Jammu and Kashmir Public Safety Act. According to a government report dated September 6, more than 3,800 people were arrested, though about 2,600 have since been released.

Changes in the past two years

After the abrogation of Article 370, the civil secretariat in Srinagar hoisted the Indian Tricolour, while the state’s own flag was missing. The rectangular flag – red background with three white vertical stripes alongside a white plough in the middle with handle facing the stripes – fluttered next to the Indian national flag on the secretariat for more than six decades.

In October 2020, the Centre paved the way for people from outside Jammu and Kashmir to buy land in the Union territory. However, the amendment did not allow transfer of agricultural land to non-agriculturists except in few cases.

On June 24, 2021, PM Narendra Modi addressed the first-ever all-party meeting with 14 leaders of eight political parties of the Union Territory, including four chief ministers, nearly after two years of the abrogation of Article 370 on August 5, 2019.The PM said the meeting was convened to remove the distance between Delhi and Srinagar. However, no timelines emerged on when the Assembly elections will be held or when the statehood will be restored. All parties urged to first finish the ongoing delimitation process of the Election Commission to redraw the constituencies.

In July 2021, the rules were changed to allow domicile certificate to be granted to the husbands of local women married to people from outside Jammu and Kashmir. The move will allow them to buy land or property in the Union territory, or apply for government jobs. All people who have resided in the UT for 15 years, or have studied for seven years and appeared in Class 10 or 12 examination in an educational institution in the region, and their children, are eligible for grant of domicile status.

The CID wing of Jammu and Kashmir Police has ordered the denial of security clearance required for passport and other government services to all those involved in stone-pelting or subversive activities. The order was issued on July 31 2021.