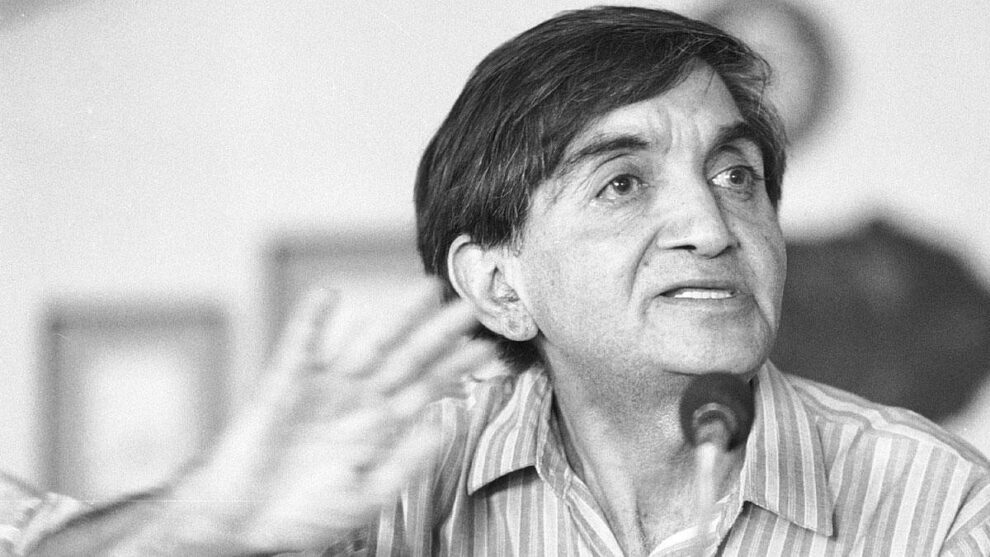 The interplay between Hindi and English is one of the themes of Verma’s first book of stories, Parinde. All seven stories in this 1958 collection, which includes ‘Picture Postcard’, are set in cities and, one assumes, in strictly anglophone milieus—a British-era club, a university campus, a jukebox café, etc. Often, what we get on the page is a Hindi translation of an exchange that is taking place in English, or indeed the direct English transcript of the dialogue. The characters in ‘Picture Postcard’ greet each other with the posh affectation ‘how do you do’. In ‘Diary Ka Khel’, the teenage protagonist pastes a photo of his love interest on a page of his diary and captions it in English: ‘Bitto . . . who has come here from Kanpur for her holidays.’

The eponymous story, ‘Parinde’, itself reads like it was dreamt up by the author entirely in English. It revolves around a Burmese doctor, an Anglo–Indian musician and an Indian teacher, Latika; and it is set in a Christian boarding school in Ranikhet, at the cusp of the holiday season. (In Verma’s fiction one keeps encountering characters—adults or children—who are on a holiday; Ve Din is another holiday novel in this sense.) Only occasionally does the reader become aware that the Hindi prose is just a layer concealing an altogether different linguistic sensibility, which reveals itself when, say, the scene shifts to a chapel where ‘Lead, Kindly Light’ is being sung, or when the doctor goes down on one knee and addresses Latika jokingly in ‘Elizabethan English’. Verma seldom highlights the Hindi–English break in this story overtly, because it is not important to him. He doesn’t want us to think too much about it. Instead, his focus is on the similar preoccupations—founded on the twin philosophical pillars of love and death—shared by these three human beings who come from very different backgrounds.

At the time of its publication, Parinde was championed by the renowned Hindi critic Namvar Singh—often addressed by his fans and acolytes as ‘Guruji’—as the first notable example of what he dubbed the ‘Nayi Kahani’ (New Story) movement. According to Singh, in the late ’50s the Hindi story underwent a kind of sea change, not unlike the one that had begun to transform Hindi poetry around a decade prior to that. So the aesthetic revolution of Nayi Kavita (New Poetry) was followed by a similar upending of all conventional models of storytelling by the Nayi Kahani set, which included Verma, Mohan Rakesh and others. In Singh’s reading, these writers were not concerned with spinning yarns for the purposes of moral edification or entertainment; rather, they wanted to connect with their readers on the level of feeling, through the power of the image. They did so by paying close attention to form and through their deft manipulation, in Singh’s terminology, of both the ‘structure’ and the ‘texture’ (diction) of their stories. Their concerns were by and large urban middle class, as were the settings of their stories. This was a significant break from the old Premchand school of fiction and its predominantly rural sphere of interest. With the Nayi Kahani, the Hindi writer developed a new sense of place, a new sense of the self. To shed light on the Nayi Kahani’s symbolist leanings, Singh cited in his book Kahani Nayi Kahani several examples from Verma’s debut collection of stories, devoting an entire chapter to Parinde.

Singh’s glowing appraisal, no doubt, provided Verma’s literary career with the early impetus it needed, though there are those who would dispute that and say that too much is made of this one good review from one influential critic. In any case, Singh himself was disillusioned by Verma’s later work. In 1990, Singh dedicated a whole hatchet-job issue of his magazine Alochana to Verma. ‘It’s an unprecedented example of mudslinging, in the whole history of Hindi literary journalism,’ Verma wrote in a letter to a sympathetic friend. ‘If he was so angry and annoyed with me, why did he have to publish an issue [centred on me]?’

Verma even found Singh’s ‘Nayi Kahani’ tag somewhat meaningless, not to say misleading, in relation to his own work. His contention was that the newness was confined to the name of the movement and hardly ever reflected in the writings purportedly linked to it. Most of what passed for the post-Premchand Nayi Kahani, in Verma’s assessment, was actually old-hat realism. ‘The realism of my contemporaries may be more sophisticated, precise and realistic than the realism of Premchand’s generation,’ Verma once said, ‘but it never leads to any experimentation with the structure, the form of the story.’ Due to his writerly investment in matters of form—a propensity inherited from Woolf and Tagore—Verma tried to distance himself from Nayi Kahani and its adherents. He would often get peeved at the very mention of the term in interviews. ‘What you call the Nayi Kahani group, I was never a part of it,’ he told an interviewer in 1989.

The urge to go it alone has an old and noble legacy in the creative arts. There’s nothing new about writers and artists rebelling against group identification, against the collectivization of thought and artistic purpose under the rubric of some simplifying ‘ism’.

Verma’s antipathy to Nayi Kahani can also be seen in that light. But there’s no denying that Parinde brought something original and refreshing to Hindi literature—almost as though this was a point of rupture; a new beginning, ex nihilo. The other astonishing feature of the book is that it seems to carry none of the jagged edges and deformations usually associated with first books. It’s as though the writer has arrived in a state of, well, premature maturity, already in total control of his voice and his material.

The signs of things to come are all over the place in Parinde. The central themes of his writing life: the idea of home, the burden of relationships, the substance of memory, the richness of solitude, the tragedy of death. Already here, the central pillar of his reading life: European literature (Woolf and Flaubert, Valéry and Apollinaire are among the names that appear in these stories).

Excerpted with permission from Here and Hereafter: Nirmal Verma’s Life in Literature, Vineet Gill, Penguin India. Read more about the book here and buy it here.

Why it took about 130 years for Maharaja Gulab Singh’s story to reach readers?
From “The Greatest Goan Stories Ever Told”: Read an excerpt from Jessica Faleiro’s story “On Sernabatim Beach”
Comment