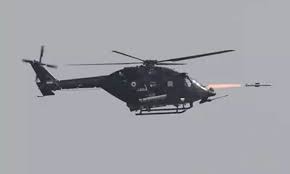 The HELINA anti-tank missiles were test-fired during the joint user trials by the Indian Army and Indian Air Force (IAF).
According to DRDO, the four missions were carried out for evaluating the missile capabilities in a minimum and maximum range of 7 kilometers.

The final mission was carried out with a warhead missile against a derelict tank. All the mission objectives were met.
The Missile is guided by an Infrared Imaging Seeker (IIR) operating in the Lock on Before Launch mode. It is one of the most advanced Anti-Tank Weapons in the world.