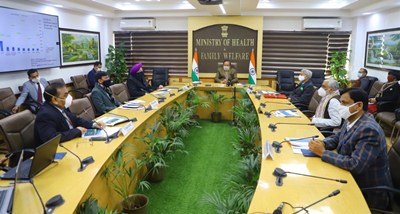 Health and Family Welfare Minister Dr. Harsh Vardhan chaired the 23rd meeting of the high-level Group of Ministers on COVID-19 by video-conference today. He said that less than 12,000 cases were reported in the last 24 hours and the Active Caseload has reduced to just 1.73 lakhs.

The current testing capacity rests at 12 lakhs per day. He added that out of the total active cases, a meagre 0.46 per cent are on ventilators, 2.20 per cent are in ICU and just 3.02 per cent are on oxygen support. Dr Harsh Vardhan stated that 165 cases of UK Variant have been reported so far. They are kept under supervised quarantine and surveillance.

Dr. Harsh Vardhan said, India has supported other countries with supply of the COVID-19 vaccine during such global public health crisis and trained the personnel of several countries in vaccine administration. He added that by being a ‘Mitra’ to the global community, India has earned global trust by supplying indigenously made vaccines at this crucial hour.