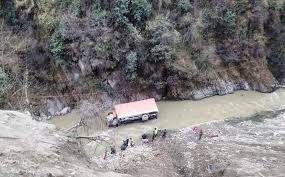 Jammu, Jan 20: The body of a 22-year-old truck driver from Haryana was found in a stream in Jammu and Kashmir’s Ramban district on Wednesday, two days after his vehicle skidded off the road and plunged into a 150-foot-deep gorge along the Jammu-Srinagar national highway, officials said.

The Jammu-bound truck rolled down into a stream at Sherbibi on Monday, following which one person was rescued in an injured condition, while the driver remained untraced and was believed to have been swept away by the fast current, the officials said.

The body of the missing driver, identified as Monu of Hisar in Haryana, was recovered from the Bishlari Nallah on Wednesday morning, they said.

The officials said the body was handed over to his family members after legal formalities.