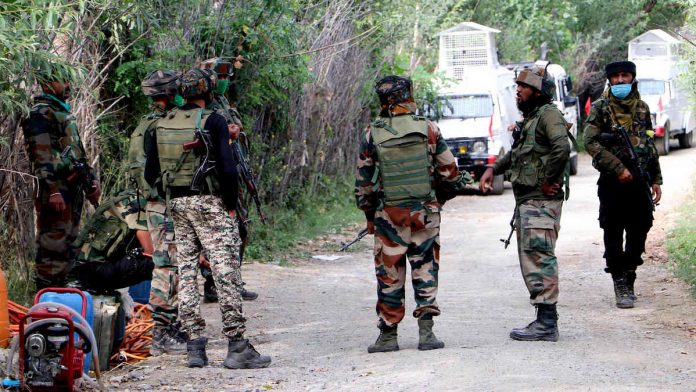 Srinagar, Aug 20: The Cordon and Search Operation (CASO) launched by security forces on Thursday night in Handwara in the frontier district of Kupwara, ended with the killing of two Lashker-e-Toiba (LeT) militants, including a top commander.

Inspector General of Police (IGP), Kashmir, Vijay Kumar said one of the two militants killed was a top LeT commander Naseer-u-din lone who was involved in the killing of six CRPF jawans at Sopore in Baramulla and Handwara,Kupwara in April and May this year. The recovery included a rifle which was snatched by militants from a CRPF jawan.

The operation ended after both the militants were killed and arms and ammunition recovered, police spokesman said.

He said the CASO was launched last night after inputs about the presence of militants in an orchard at Ganipor, Kralgund in Handwara in the Kupwara district.

However, when the security forces were moving towards a particular area in the orchards, militants hiding there opened indiscriminate firing with automatic weapons, he said adding the fire was returned ensuing in an encounter.

He said two militants were killed in the encounter late in the night. Two AK rifles and other war like stores have been recovered.

Meanwhile, IGP Kumar said LeT commander Lone killed in the encounter was involved in killing three CRPF jawans at Sopore on April 18, 2020 and 3 CRPF jawans at Handwara on May 4, 2020.