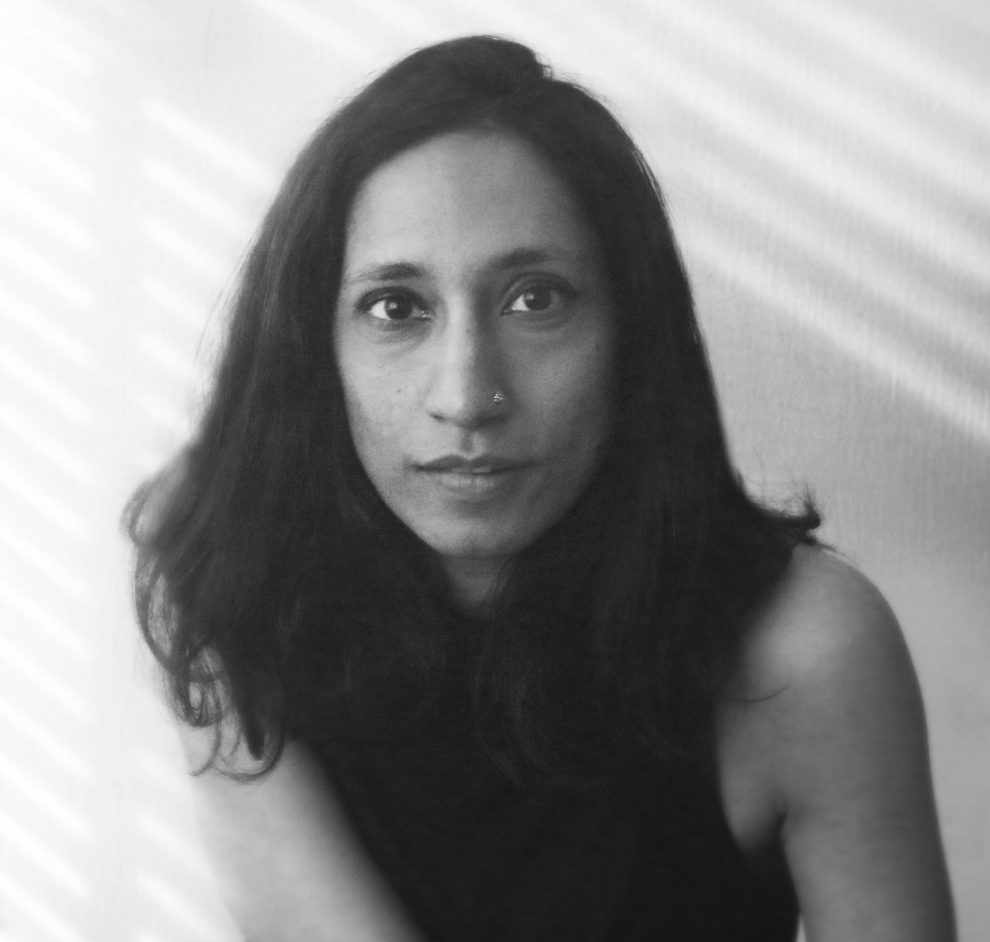 The morning after the office party, I met Homi uncle down the road from his home, at Café Universal. “Moonie!” he called out and gave me a hug, for which I was unprepared, being hungover and as yet unused to my new situation. The fondness in Homi’s eyes killed me. He ordered bun maska and chai, I got an omelette and a side of cheese balls, needing the steadying effect of grease.

“Not much. There was an office party.”

“Oh ho!” he said, mimicking the action of drinking from a bottle.

As we ate, Homi picked up from where he’d left off the previous day. Burjor left Navsari for Bombay soon after he turned eighteen, in 1953. His sister’s boyfriend, the schoolteacher, hooked him up with a friend living in Petit Sanatorium near Kemps Corner. But since the sanatorium, the same one pictured on the postcard in the box, was meant to temporarily shelter Parsis, Burjor didn’t have long to live there. His first job was cleaning and serving at an Irani café in Dhobi Talao. The café opened around five in the morning for people on their way to bet at the races. This meant Burjor had to be up at dawn to help with the baking of pao and work all day till the evening. At night he slept in the shop. The job went on for months—till he was caught making out with the café owner’s daughter.

“Frankly speaking, I don’t know how he found the time,” Homi said. “But then we’re talking about Burjor. He was a ladies’ man. What I’m telling you about the Irani’s daughter is what he told me. But I have seen with my own eyes how girls used to look at him and how he used to patao them. Don’t get me wrong—Burjor was a decent guy. He loved women, of all kinds. He wasn’t some dirty roadside Romeo type. But yes, he got into trouble because of women. Biggest trouble was with your real mummy. Got her pregnant and then had to marry her.”

“He and this Irani’s daughter, who by the way was ten years older than him, were doing chumma-chaati in one lane near the café. Someone who knew her father saw them and went straight to the Irani. The Irani gave Burjor two slaps and threw him out.”

Burjor, who had no intention of being a waiter for long, had already been working on his next career move. One of the regulars at the café owned a bunch of taxis and was frequently in need of drivers. In the evenings, Burjor took lessons from one of the guy’s drivers. By the time he was kicked out, Burjor was ready to drive a cab.

After breakfast, we decided to walk around Ballard Estate. It was my suggestion for my head was a delicate globe throbbing from the long-lasting effects of cheap alcohol and the information Homi issued in the stoic style of a 1980s newsreader. He was narrating Burjor’s story with single-minded focus as though divesting himself of a precious object in his safe-keeping on to the intended recipient. However, the intended recipient wasn’t ready to receive it all at once. The intended recipient was having a hard time swallowing the cheese balls, normally addictive, and was sitting with her head in the palm of one hand, as if propping her brain drooping from the weight of this story. Yet Homi, the rug-puller, noticed none of this and ploughed on.

Meanwhile, I tried to absorb the idea that soon after arriving in Bombay, eighteen-year-old Burjor had begun a career as a Casanova by seducing an older woman. An older woman! This suggested a degree of sexual maturity. Had he had any experience in Navsari? In between homework, doing the dishes and nursing his bedridden father, would Burjor skip out to the town’slover’s lane to squeeze some girl’s tits? So far, I knew of the Irani, my biological mother—who he knocked up, making me a goddamn mistake!—and Mini. How many others had this rustic Lothario charmed?

We walked down Adi Marzban Path towards Ballard Estate. Adi Marzban, the Parsi-Gujarati playwright considered a genius for his double entendre-filled comedies, had a part to play in Burjor’s story, about which I’d learn later on. The queasiness I felt ebbed inside the Edwardian grid of Ballard Estate. As always, the solid stone buildings had a sedative effect on my nerves. And, as if a predetermined programme clicked into motion, I began my tour guide routine.

“See Homi uncle, I don’t know if you know but the area in which you live came up in the early 1900s when land was reclaimed for the Alexandra Docks. The reason some of these streets are named Cochin and Calicut was because of the maritime trade between the cities. Let’s turn left and walk towards Grand Hotel.”

Homi looked at me with admiration and affection, making me wish I’d kept my mouth shut. “So much you know, Moonie. You know Burjor used to tell me he fell in love with Bombay as a taxi driver. He loved to drive around and see things. You have the same love for the city. It must be his influence.”

“How would he have influenced me?”

“His spirit, Moonie. Burjor’s spirit is sending you vibrations. My guru says people don’t die, they transform into different energies.”

Shri Homi, the same crackpot Shivaji had taken to during his spiritual phase in the eighties. If I brought it up, Homi would no doubt interpret the coincidence as a divine convergence.

“Yeah, I read about the guy. I read he was investigated for tax fraud.”

“Tax fraud on the surface. Actually, it was a conspiracy against him by evil energies. But it’s over and done with. Guruji’s aura is too powerful, no one can touch him.”

“So Burjor started driving a cab. Then what?”

The first cab was a Hillman Minx, which belonged to a seth who owned several taxis. For some time, Burjor lived in the man’s garage and did odd jobs aside from driving the cab. There he met a fellow driver, Madhu Pereira, who had a lucrative side gig brewing liquor.

Pereira, an East Indian, came from a village in Vasai, where it was common for families to make arrack from fruit. So he had the tools and the know-how. What he needed was a partner. Prohibition was in place at the time and there was much demand for cheap booze.

Burjor, who was always looking for ways to make quick money, jumped at the chance. The job wasn’t entirely new for Burjor. He’d been to his father’s distillery in Vansda, he knew the basics of working a crude still. Madhu Pereira and Burjor would drive their taxis to swamps in Vasai, Andheri, Juhu, where brewers made liquor from rotting vegetables and fruit. They’d hide the hellish stuff in tyres and transport it to clandestine bars around the city. Some of them were the ‘aunty’ bars Thomas had told me about.

“It was a natural fit. Booze was his family dhanda plus Burjor enjoyed anything slightly shady. He was an ek number ka admi who liked doing do number ka kaam.”

We walked past Grand Hotel, past Britannia, where I stepped in to take away a caramel custard. A cat was curled at the till, where once the owner’s soda-drinking pet rooster, immortalized on the paper napkins, had stood. We halted at the circle with the lamp post marking the Bombay Port Trust’s involvement in World War 1 and fixed a date to meet a couple of weeks later. This time, Homi was in a hurry to leave. He was off to catch a train to “see his people” in Gujarat and said he would explain later.

Excerpted with permission from Half-Blood, Pronoti Datta, Speaking Tiger Books. Read more about the book here and buy it here.

A delectable teatime treat: Here’s how you can make ‘Aloo Tuk Chaat’
“A History of Sriniketan” details how Rabindranath Tagore set up a centre for rural reconstruction as a wing of his Visva-Bharati International University at Santiniketan in 1922
Comment