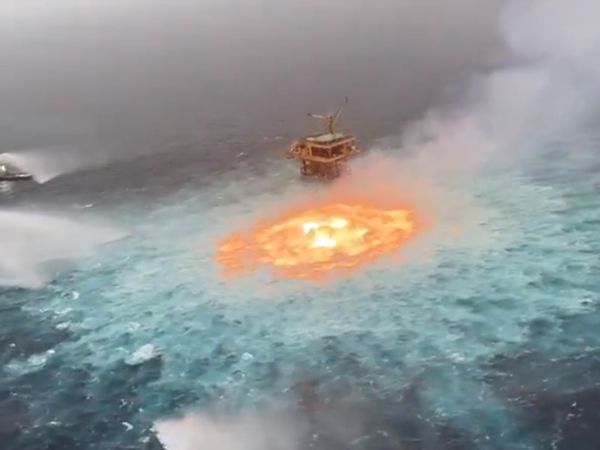 A gas pipeline leak underwater in the Gulf of Mexico has resulted in a fire on the surface. Mexico’s state-owned oil company called ‘Pemex’ released a statement saying that that the undersea pipeline leaked. The ocean was set ablaze around 500 feet away from the drilling platform. This is located in the west of Mexico’s Yucatan Peninsula.

Soon, pictures and videos of the fire went viral on social media. The Mexican and American media, along with several users around the world,  shared videos of the ‘eye of fire’ that was seen right in the middle of the ocean.

Reuters stated that the underwater pipeline was connected to a platform at Pemex’s flagship company called Ku Maloob Zaap oil. It is situated at the gulf’s southern rim.

As stated by USA Today, it took 5 hours for the fire to extinguish. Eventually, it was put out by 10:45 in the morning. The video also shows three boats surrounding trying to take it out. The company used nitrogen to douse the fire. No injuries were reported as well as no damage to the production.

Pemex is no stranger to such accidents. It has an unfortunate long record of industrial mishaps like these in its premises. They are yet to investigate the cause behind it.

Coming back to the video, it has gotten 24.2 million views on the microblogging site. Many other clips showing the same has gotten many views as well and are being retweeted constantly.

Netizens were not only terrified but were angry as well. They pointed out the environmental damage the leak is capable of causing. “All I can think about is the poor marine creatures affected by this. Humans are so damned destructive. We are not worthy stewards of this earth,” one user said.

“Apocalyptic scenes,” another user stated. Some were even reminded of ‘Percy Jackson’ books and movies as they saw the ring of fire engulfing the water body.