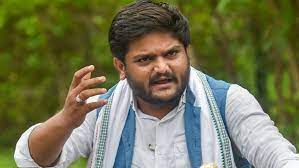 JAMMU: Gujarat Congress Committee working president Hardik Patel, who recently expressed discontentment with the state party leadership, on Wednesday resigned from Congress.
Taking to Twitter, Patel said, “Today I took the courage to resign from the post (Gujarat Congress Committee working president) and primary membership of the Congress Party. I am sure that my decision will be welcomed by all my colleagues and the people of Gujarat. I believe that after this step, I will be able to work truly for Gujarat in future.”
Earlier, Congress leader Rahul Gandhi reached out to disgruntled Gujarat Congress Committee working president Hardik Patel to sort out differences in the party unit ahead of state assembly polls, sources had said.
Party sources had claimed that Rahul Gandhi himself sent a message to Hardik Patel asking him to continue in the party. He also asked the party in charge and other leaders to reach out to Patel to sort out the differences.
Speculations were rife about Patel joining the Bharatiya Janata Party (BJP) after he had lauded the BJP government for revoking Article 370 and the construction of Ram Mandir.
However, he had issued a clarification that he is not upset with party leaders Rahul Gandhi or Priyanka Gandhi but he was upset with the state leadership.
According to reports, Patel who rose to prominence in July 2015 by leading a Patidar reservation movement, is upset with the party leadership for a long time now.
“He wanted to become president of the state Congress committee but he was only made the working president. Despite being appointed as the working president his opinion is not taken on major decisions by the state leadership,” sources had said.
Speculations are also there that Patel might join Aam Aadmi Party.
The Gujarat Assembly elections are slated to be held this year.