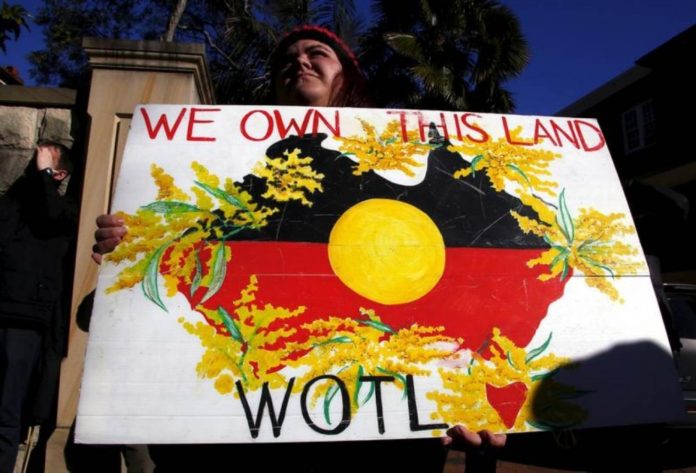 BRISBANE: Like many indigenous Australians, Pat Dudgeon grew up in the shadow of a mountain range that made her feel inferior and “conquered” on her own traditional lands.

The King Leopold Ranges, a mountain chain in Western Australia, were named after the Belgian ruler King Leopold II, whose regime killed and maimed millions of Congolese in the late 1800s.

So, when the landmark was renamed Wunaamin Miliwundi on July 3 to honour its traditional owners, Dudgeon, who is a member of the Bardi Aboriginal community, saw the move as a positive step in Australia’s long road toward reconciliation.

“As an Aboriginal woman, I was really chuffed to see that happen – it was very empowering for me,” the psychology professor at the University of Western Australia told the Thomson Reuters Foundation.

As protests over racial inequality continue to sweep across the world, Australia is seeing a renewed push for the removal of cultural reminders of colonialism which rights advocates say are harmful to the pride and health of Aboriginal citizens.

Thousands of landmarks and places across Australia bear names that are offensive to Aboriginal people and Torres Strait Islanders or that celebrate their oppressors, indigenous activists say.

They are calling for geographical locations to revert to names they were given by traditional landowners who can trace their lineage back 60,000 years, instead of those given by white settlers.

“It has troubled me for years that an extraordinary area of Western Australia should be named in honour of a person who is widely regarded as an evil tyrant,” said Western Australia Aboriginal affairs minister Ben Wyatt on the renaming of the King Leopold Ranges last month.

“It’s important to acknowledge and promote the long history of the Aboriginal peoples’ connection to this land, and the proud place it takes in Western Australia’s shared history,” he said in a statement.

In 2018, the Australian Electoral Commission agreed to change the name of the federal seat of Batman, in Melbourne, to Cooper in recognition of indigenous activist William Cooper.

John Batman, considered one of Melbourne’s founding fathers, was accused of involvement in the massacre of Aboriginal people in Tasmania during the early 1800s.

Also in 2018, a mountain in the northeast state of Queensland named after racial segregationist Jim Crow was renamed Baga to reflect the site’s indigenous heritage.

The list of name places that indigenous citizens and advocates hope to see changed next include a series Blackfellow Creek in Cairns and Black Gin Creek in Rockhampton.

“I think if you grow up in conditions where the most brutal of your oppressors… are celebrated and you have landmarks named after them, it’s a form of racism and oppression,” said Dudgeon.

The psychological and physiological effects of racism on indigenous Australians – who make up more than 3% of the population, according to government data, and rank near the bottom on economic and social indicators – are well documented.

A 2019 health study revealed that indigenous adults living in the state of Victoria were four times more likely to have experienced racism over the previous year than their non-indigenous counterparts.

“As a life stressor, racism directly and negatively affects the cardiovascular system causing high blood pressure (or) hypertension and heart disease,” she said in a statement.

“It seriously affects mental health, causing depression, anxiety and other psychological and psychiatric disorders, and racism contributes to low birth weight of newborns, as well as premature birth,” Chee added.

And the racism does not need to be overt to do damage, noted historian Grace Karskens.

She pointed to the name of Townsville, a city on the northeastern coast of Queensland, as an example.

The city was named after Robert Towns, who is said by some historians to have endorsed slave trading expeditions to nearby islands to bring back labour for local cane fields.

Indigenous leaders and advocates want Townsville to change its name and remove a statue of him that stands on Pioneers Walk, a route that features statues of people who have shaped the city’s history.

“Until you know that history, it doesn’t immediately jump out at you like ‘nigger’ or ‘Jim Crow’ or those other disgusting words,” Karskens said.

“(In) Townsville we need to understand what he did because most people don’t remember, they just walk past the statue.”

Townsville Mayor Jenny Hill disagrees that Robert Towns’ statue should be removed, noting it is just one of several statues in the city commemorating historical figures.

“They are all significant people that are part of Townsville’s history and, good or bad, they have been involved in the creation of this community,” she said in emailed comments.

‘MATURING AS A NATION’

Academic and former diplomat Stephen Hagan, a Kullilli man from southwest Queensland, is among those calling for places like Townsville to be renamed.

Hagan fought for nine years to change the name of a grandstand called ES “Nigger” Brown in a stadium in the city of Toowoomba.

The stand was demolished in 2008 with its name unchanged.

Hagan said while he believes the Black Lives Matter movement has pushed the nation to talk about race, he feels the majority of Australians are not ready to face up to the pain these landmark names have caused in their own country.

But the recent renaming of the King Leopold Ranges is a step in the right direction, showing that Australia is “maturing as a nation”, he added.

“It’s a big statement,” he said. “Look at the changes around, it’s the power of the people. If they make enough noise they can bring change any time, any place.”