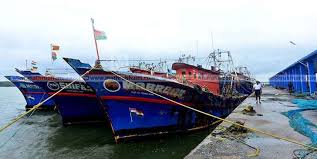 Finance secretary Ajay Bhushan Pandey on Sunday hinted that the government is working on another stimulus package but he refrained from giving a timeframe.

“We keep monitoring the situation on the ground to assess which sector of the economy or segment of the population needs what kind of help at which time and respond accordingly. We keep taking suggestions from industry bodies, trade associations, various ministries and after going through their suggestions and requirements of the economy, we come out with timely measures.

Pandey said that he could not give a timeframe for the stimulus package, but yes the government was on it and deliberations on further interventions were on.

Talking about the current state of the economy, Pandey said that the economy was recovering and moving towards sustained growth.

The October GST collection has been Rs 105,155 crore which is 10 per cent higher year-on-year for the corresponding month last year. This September, the economy had also shown 4 per cent growth at Rs 95,480 crore in GST collections y-o-y. Further, the country has seen a growth in electricity consumption, exports, and imports, he said.

“September and October data shows that we have reached Pre-COVID-19 level and gone into positive territory. If we compare with the last year, the E-Way bill in September has seen year on year growth of 10 per cent and in October it has seen a growth of 21 per cent,” he said.

“If we are able to maintain this growth for the next five months, then we can say that we can transition from deep negative zone to near-zero growth zone by March 2021. International Monetary Fund (IMF) has projected India’s GDP to contract 10.3 per cent this fiscal year, revised from its forecast of a 4.5 per cent decline in June,” he added.

The Reserve Bank of India had last month said that the economy is likely to contract by 9.5 per cent in the current fiscal. GDP contracted 23.9 per cent in the first quarter of the fiscal, as per the estimates of the Central Statistics Office (CSO).

Pandey said, “We are analysing every sector and this is a continuous process. Since the COVID-19 outbreak, we have been continuously monitoring every sector. Whatever was required for helping migrants, vulnerable sections of the rural or urban populations, we did. When the nation was in lockdown, we gave cash to women Jan Dhan account holders in their bank accounts through DBT. We provided early instalments to farmers under PM Kisan Yojana.”

“We helped employees and employers in their EPF contribution. We earmarked Rs 3 lakh crore for enhanced working capital to MSMEs, out of which Rs 2 lakh crore has been sanctioned and amounts are being disbursed. MSMEs were also given the benefits of loan moratorium. We have given income tax refunds of Rs 1.27 lakh crores in last seven months. We have given GST refunds of Rs 70,000 crore,” he added.

He said that a total refund of Rs 2 lakh crore has been given in the last seven months. During this period, revenue collections were impacted but the government did not stop or slow down the refunds.

Ruling out the possibility of any cut in GST rates in near future during the COVID pandemic, he said that there is the wrong impression that rate cut boosts sales and growth.

“One may see the example of mobile phones. Mobile phones are attracting an 18 per cent GST rate from April 1, 2020, up from the earlier rate of 12 per cent, after the GST Council corrected the inverted duty structure. Now see the current sales figures for mobile phones. Despite the increased tax rate, their sales are up,” he said.

“Frequent tinkering with the tax rates is not good for the economy. It also sends wrong signals to domestic industry and international investors. We have to provide stability and predictability in our tax systems,” he added.

UPI payments grow 80% in a year with over 2 billion payments: NITI Aayog CEO
Self-help groups to be given Rs 1,400 crore for women empowerment: CM Shivraj
Comment