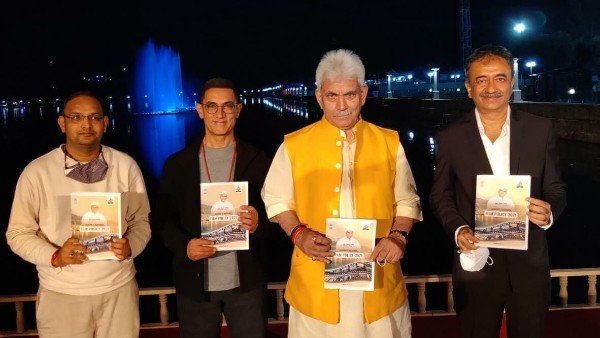 Jammu: After the release of first-ever Film Policy, the Union Territory Government is going to set up Jammu and Kashmir Film Development Corporation and is presently weighing options as to who should head it–a bureaucrat or a film personality but the choice might ultimately fall on the latter amid reports that the Government has already approached certain Bollywood personalities for the assignment.

“This will be for the first time that Jammu and Kashmir will have Film Development Corporation. The step is aimed at ensuring maximum participation of Bollywood not only in their once favourite destination of Kashmir but also Jammu,” official sources said adding that the Government is in touch with certain leading film personalities who would be part of the Corporation including either as Chairperson or Advisory Council which would also be part of the Corporation.

It may be mentioned here that Lieutenant Governor Manoj Sinha had visited Mumbai last month.

Asserting that Kashmir remained obvious choice of Bollywood as was the case from sixties to eighties before the onset of militancy, sources, however, said that there were many destinations in Jammu region including Basohli, Sudh Mahadev, Bhaderwah, Patnitop etc which will also be explored simultaneously.

“First we want Bollywood to start visiting Jammu and Kashmir to revive past links with the Valley which have been broken for last three decades due to militancy and once they start coming, obviously there are many destinations for shooting in Jammu including the religious shrines,” sources pointed out.

Noting that experiment of bureaucrats heading Censor Board in Bollywood earlier had failed and nowadays film personalities are being appointed as Chairpersons of the Board, sources said the Government might take call on similar lines to pick head of the Film Development Corporation. However, they added, the Advisory Board is likely to be the mix of film personalities and bureaucrats.

“Focus of the Government will be to ensure that majority of clearances for shooting of movies by the Bollywood are given Online by the Corporation which will avoid frequent shuttling of Producers and Directors to Kashmir.

Also, the Government proposed to allow the Bollywood to utilize airstrips across Jammu and Kashmir for the purpose of shooting. In due course of time, the Government has decided to set up Film City and TV Studios in the Union Territory and will engage brand ambassadors for promotion of shooting places.

This, according to sources, will also help promote tourism in Jammu and Kashmir which has, of late, started showing signs of revival despite COVID pandemic.

Development and providing all facilities at shooting places is also high on agenda of the Jammu and Kashmir Government which might be assigned later to the Film Development Corporation, sources pointing out and said the steps were aimed at facilitating smooth movement of the film units.

The Government has decided to take all possible steps to revive cinema halls and upgrade the existing theatres. For the purpose, all possible help will be rendered to the cinema hall owners and those proposing to set up new theatres.

The Government also proposed to hold Film Festival on the name of Jammu and Kashmir.

It may be mentioned here that the Lieutenant Governor had on August 5 unveiled the first-ever Film Policy of Jammu and Kashmir to once again attract Bollywood and other film makers to the Union Territory and give boost to tourism.

No Parliament session for 60 per cent of country, voice of people crushed: Rahul Gandhi
Justice to Wattals & Choppans of Kashmir
Comment