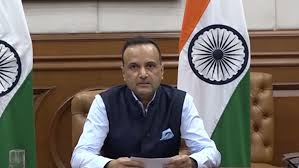 Government today said that due to the global COVID-19 situation, it has been decided that this year there will not be a foreign Head of State or Head of Govt as the chief guest at the republic day ceremony. MEA Spokesperson Anurag Srivastava informed this in New Delhi today.

Replying to a query, He said, India and Bangladesh are commemorating 50 years of diplomatic ties this year and a tri-service contingent from Bangladesh is visiting India at the invitation of Government to participate in the Republic Day Parade.

The Spokesperson said, this is a testimony to our ties which were forged in shared sacrifice. He said, this year will be historic in our relations as we are also commemorating the 50th anniversary of the liberation war.

Mr Srivastava said, during a virtual summit of the Prime Ministers of India and Bangladesh last month, both countries agreed to jointly organise several activities to commemorate the 50th anniversary of diplomatic ties and the liberation war in India, Bangladesh and third countr