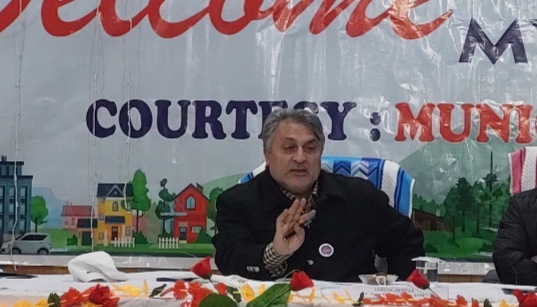 KUPWARA: Principal Secretary, Skill Development Department, Dr. Asgar Hassan Samoon, today said that ‘My Town My Pride’ 2.0 (MTMP) programme has shown a right direction towards exploring new vistas of development in towns adding that development of towns is top most priority of Jammu and Kashmir government.
Principal Secretary, who is also Mentor Secretary for Kupwara district, said this during his participation in the ambitious MTMP programme held at Town Hall, Kupwara. He inspected there stalls established by various departments highlighting their achievements and activities.

Principal Secretary said that ‘My Town My Pride’ programme is envisaged to provide awareness about various government schemes to the people living in towns. He said creation of employment opportunities is paramount to infrastructural development adding that Deputy Commissioners have been directed to ensure identification of educated unemployed youth in all villages and towns for their proper training in their field of interest and trades so that they shall be able to set up their own self employment units, for which government is always ready to handhold them. He said skill development and self-employment are interconnected fields on which the government is focusing with utmost priority.

Dr. Samoon interacted with the stallholders and beneficiaries and enquired about their schemes.

On the occasion, Dr. Samoon distributed sanction letters among the beneficiaries under PMMSY, PMEGP and KVIB.

Dr. Samoon interacted with the Citizen Forum Kupwara who presented their memorandum to him about the developmental issues of the Kupwara town.

In his address, Deputy Commissioner Kupwara said that the Jan Abiyan activities under the ambitious programme ‘My Town My Pride’ were held in the town during last one week in all the 3 municipalities of the district. He said sanitation and beautification programmes were held and door to door awareness about the government schemes by the functionaries of municipalities and line departments were also provided.

Meanwhile, a cultural programme and drama skit were presented during the programme.

A part of me will stay with J&K, says Rohit Kansal
Active public participation will transform towns: Prerna
Comment