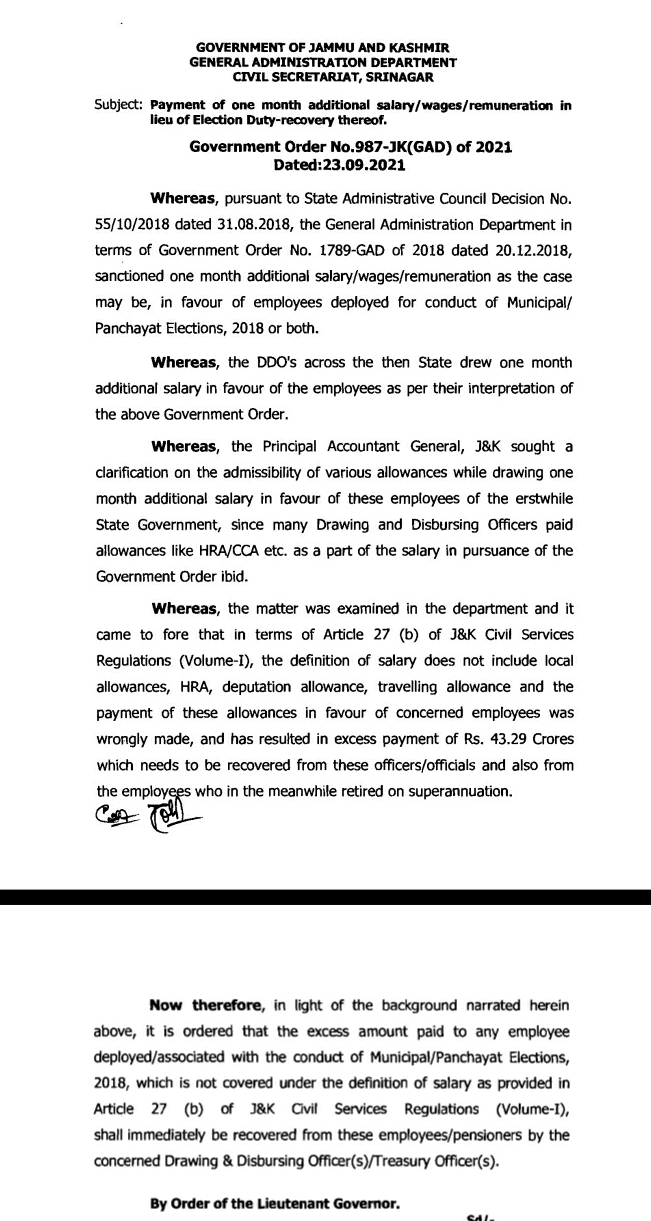 SRINAGAR: Government has ordered “recovery” of excess amount paid to employees as part of additional salary for discharging polls duties during Municipal and Panchayat Elections.

In all, Rs 43.29 crores have been paid to employees, along with additional salary due to mistake by DDOs who construed “salary” to be inclusive of local allowances, HRA, deputation allowance, and travelling allowance, according to a government order.

Following decision by erstwhile State Administrative Council on 31 August 2018, the General Administration Department on 20 December 2018 had sanctioned one month additional salary/wages/remuneration as the case may be, in favour of employees deployed for conduct of Municipal and Panchayat Elections, 2018 or both.

“The DDO’s across the then State drew one month additional salary in favour of the employees as per their interpretation of the Government Order.”

However the Principal Accountant General, J&K sought a clarification on the admissibility of various allowances while drawing one-month additional salary in favour of these employees as many “Drawing and Disbursing Officers paid allowances like HRA/CCA etc. as a part of the salary in pursuance of the (GAD) order.”

“The matter was examined in the department and it came to fore that in terms of Article 27 (b) of J&K Civil Services Regulations (Volume-I), the definition of salary does not include local allowances, HRA, deputation allowance, travelling allowance and the payment of these allowances in favour of concerned employees was wrongly made,” the order reads, adding, “(same) has resulted in excess payment of Rs. 43.29 Crores which needs to be recovered from these officers/officials and also from the employees who in the meanwhile retired on superannuation.”

Subsequently, the government has ordered immediate recovery of excess amount paid to any employee deployed/associated with the conduct of Municipal/panchayat Elections, 2018, which is not covered under the definition of salary as per Article 27 (b) of J&K Civil Services Regulations (Volume-I) . (GNS)