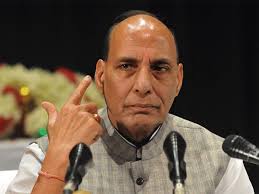 Addressing the Army Commanders’ Conference in New Delhi, Mr Singh reiterated that there are no budgetary constraints for capability development and meeting other requirements of the Army.

He said, due to the synergised operations between the Central Armed Police Forces, Police forces and the Army, Jammu and Kashmir is moving to a stable and peaceful environment conducive for overall growth and development.

Referring to the situation along the Western borders, the Minister complimented the Indian Army’s response to cross border terrorism and ceasefire violations.

Commenting on the current situation along the Northern borders, Defence Minister expressed confidence that while troops are standing firm, the ongoing talks for peaceful resolution of crisis will continue.

He said, it is national responsibility to ensure availability of best weapons, equipment and clothing to the troops braving extreme weather and hostile forces to defend territorial integrity.

Mr Singh said, the decision to grant permanent commission to women in the Army is significant decision that will ensure equal opportunities for professional growth to all officers irrespective of their gender.