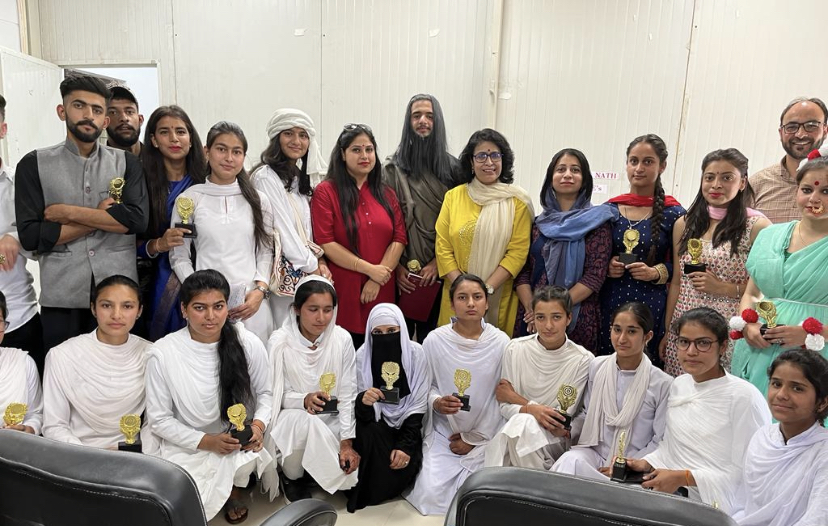 JAMMU:The Cultural & Literary Committee of Govt. Degree College, Chenani under the auspices of NSS Unit PRAYATNA and AKAM celebrated the 161st Birth Anniversary of Gurudev Rabindranath Tagore with great fervour on 9th May 2022. The Program began with garlanding the portrait of the great Nobel Laureate by the Principal of the College and a brief address by her.
At the onset Ms. Anita Devi, Sem. I presented a captivating performance of PUJARINI DANCE also known as Natir Puja, a Tale of Devotion and Sacrifice as Opposed to Jealousy and Tyranny composed by Rabindranath Tagore. A dance drama developed around the idea of Buddhist philosophy that induces people to lead a simple life, to gain an understanding of the injustice and inequality prevailing in society, and to acquire knowledge and develop a deeper insight about the universe.
Ms. Parveen Akhter sang a verses from different poems composed by the Great Poet, followed by Nishu Devi of Semester I performing melodiously on ôdi Tor Dak Shune Keu Na Ase Tôbe Ekla Chôlo Re (“If no one responds to your call, then go your own way alone”), commonly known as EKLA CHÔLO RE, a Bengali patriotic song written by Rabindranath Tagore in 1905.
Mr. Vikas Katoch of semester III read out the poem “Where The Mind Is Without Fear” a pre-independence poem in which the poet sincerely urges to God to awake his fellow beings for the realization that the essential need to live in a free and united country. He wants his countrymen to awake and enjoy the life of full dignity and honour.
Ms. Sakshi Sharma, Ms. Meenakshi Thakur, Mr. Mannat Kumar, Ms. Ambika and others performed a Skit entitled “KABULIWALA”. A tale of heart-rending friendship between a 5-year-old Bengali girl Minnie and an Afghan moneylender, Abdur Rahman or Rahamat. The students beautifully enacted the bond of mutual affection and the unconventional relationship between the two.
Mr. Vansh Katoch dressed up as Rabindranath Tagore shed light on his life and teachings.
The Principal of the College, Dr. Pragya Khanna appreciated the performances of the students and congratulated the staff and the organizers, Ms. Anita Kumari, Asst. Prof. in English & Ms. Shagufta Saleem, Lecturer in Geography for such an enthralling event. She emphasized that although a renowned Nobel Prize-winning poet Tagore prioritized poetry, he also made notable contributions to literature as a dramatist, novelist, short story writer, and writer of nonfictional prose, especially essays, criticism, philosophical treatises, journals, memoirs, and letters. In addition, he expressed himself as musician, painter, actor-producer-director, educator, patriot, and social reformer and continues to inspire millions till date.
The students were presented mementoes for their appreciable performances and were served refreshments. The Program ended with singing of National Anthem.