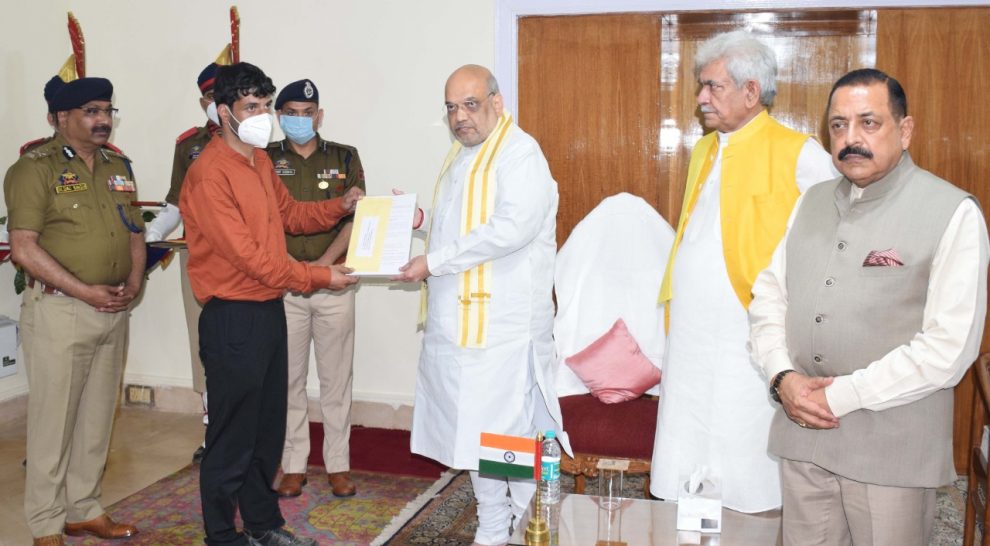 JAMMU: The Government of India led by the Prime Minister, Narendra Modi is committed to the welfare of security personnel of Jammu & Kashmir. Displaying this commitment, the Union Home Minister and Minister of Cooperation, Amit Shah handed over appointment orders on compassionate grounds in Jammu today,to the Next of Kin of four security personnel of Jammu and Kashmir Police who were killed in militant incidents in the Union Territory.

Amit Shah later interacted with the Next of Kin of the killed security personnel. Interacting with them, he said the entire nation is proud of the courage and commitment shown by these brave security personnel of Jammu and Kashmir Police. The Union Home Minister and Minister of Cooperation is on a two day visit to the Union Territory.

Amit Shah handed over appointment orders on compassionate grounds to the following:-

(1) Smt. Pooja Devi as Panchayat Secretary in Jammu District. She is wife of Late Sget Rohit Kumar. Sget Rohit Kumar was appointed as Constable in the Jammu &Kashmir Executive Police in June 2011. He remained associated with counter insurgency operations from the beginning of his career and remained in the forefront in the anti-militancy grid. He was promoted out of turn on 07.07.2017 as Sget from the rank of Constable for his gallant action. On 12th January 2022, a Police party from District Kulgam along with the Army, on specific information about presence of militants in village Sehpora Pariwan, Kulgam laid siege and started search operations. While civilians were being evacuated, militants fired on the Police party, resulting in injuries to three army Jawans and Sget Rohit Kumar, who later succumbed to his injuries. In this encounter, the dreaded Pakistani militant Babar was also eliminated.

Mohsin Mushtaq as Follower in Jammu and Kashmir Police. He is the son of Late Follower Mushtaq Ahmad. Mushtaq Ahmad had joined J&K Police in May 1990 and remained posted in JKAP 8th Bn till his death. On 09.05.1993 militants fired on a BSF patrolling party on the main road Kunan, Bandipora. The firing was retaliated to by the security forces. In the retaliatory action one militant was killed, however Follower Mushtaq Ahmad was also killed in the cross fire. The deceased left behind his aged parents and a son, who was only four months at that time.

It is pertinent to mention that the Union Home Minister, Amit Shah during his last visit to Jammu & Kashmir in October 2021 visited the house of Inspector Pervaiz Ahmad Dar in Srinagar, and in 2019 handed over an appointment letter to the wife of Inspector Arshad Khan.