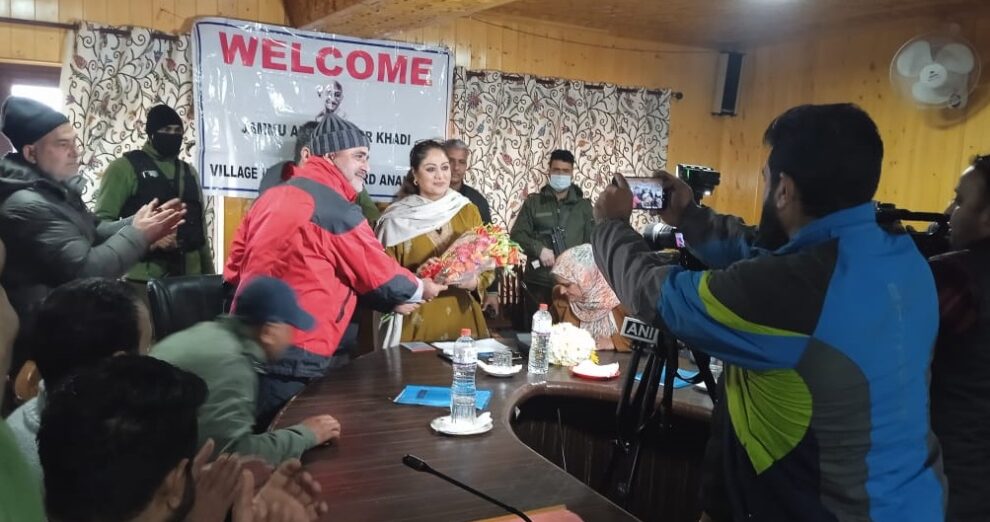 Speaking on the occasion, Dr Hina gave a brief of details about various initiatives being taken up by the Government with regard to promoting “Ease of Doing Business”.

She informed the general masses, especially educated youth that the aim and objective of today’s programme was to make the unemployed educated youth and aspiring entrepreneurs as partners in the economic development of the UT of J&K thereby improving their standard of living.

Dr. Hina assured the aspiring entrepreneurs of the area that the government is committed to extend every type of hand-holding support for development of the Micro-Industrial Sector in UT of J&K.

Underlining the need for inculcation of market-oriented skills among youth, she reiterated that the Board is working in this direction and craft & skill development programmes are being undertaken in various districts of UT of J&K. She advised the educated youth to come forward and avail benefits of the scheme and create their income/employment generating units without wandering after the government jobs.

She further said that due to the efforts of the Lt. Governor of UT of J&K, the mandate of the PMEGP to J&K KVIB has been extended to the Urban Areas also and further the quantum of the finance under Manufacturing & Service centre has been enhanced to Rs 20 lacs and Rs 50 lacs respectively so that the enough finances are provided to the unemployed educated youth and entrepreneurs to create jobs/ employment in the rural as well as urban areas.

Dr. Hina while quoting the Prime Minister’s Skill India Mission informed that Skill India mission is not merely to fill pockets but to bring a sense of self-confidence among the poor/entrepreneurs/educated youth and the Government is determined to make the youth partners in the economic development of the Country as well as UT of J&K.

Later, she distributed the Skill Development Training certificates among the trainees who attended a skill development programme in the district.

She highlighted the overall performance of J&K KVIB under PMEGP scheme in Anantnag and said that 250 units have been established involving Margin Money (Subsidy) of Rs 4.24 Crores during the current financial year.