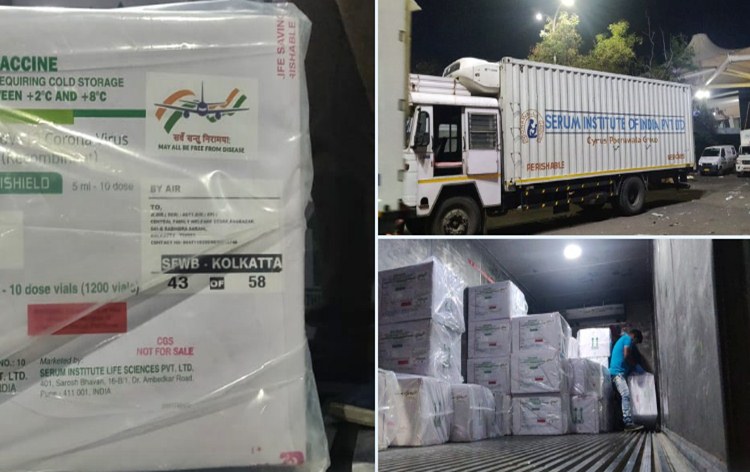 The much awaited distribution of the Covishield Vaccine developed by Serum Institute of India (SII) in Pune began today. Six cold storage containers with the stock of these vaccines were dispatched to the Pune Airport amid tight security. Before dispatching vaccines, religious rituals were performed in the presence of the staff and officers of SII who distributed sweets and expressed happiness over the dispatch of the very first consignment of Covishield.

The vaccine is being sent to 13 cities across the country from Pune Airport which includes Aurangabad, Delhi, Chennai, Bangalore, Karnal, Kolkata, Vijayawada, Hyderabad, Guwahati, Lucknow, Chandigarh and Bhubaneswar. The first flight left at 8 am for Delhi.
Civil Aviation Minister Hardeep Singh Puri said that the Civil Aviation sector launched yet another momentous mission today. He said, vaccine movement started with the first two flights by Spicejet and GoAir from Pune to Delhi and Chennai.

Information and Broadcasting Minister Prakash Javadekar today said that the first set of vaccines en route from Pune to Kolkata and India is all set to carry out the world’s largest vaccination drive.

In a tweet, Mr Javadekar said, the stamp on the vaccine container ‘May all be free from Diseases’ perfectly summarises what India stands for.