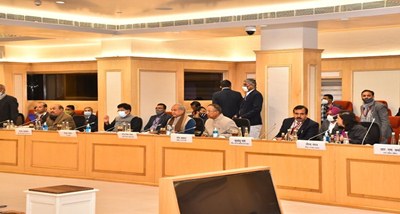 The Central Government held the seventh round of talks with the representatives of 41 farmers’ unions at Vigyan Bhawan in New Delhi yesterday to address the issues concerning them. The meeting was attended by Union Agriculture Minister Narendra Singh Tomar, Commerce and Industry Minister Piyush Goyal and Minister of State for Commerce and Industry Som Prakash and representatives of various farmers’ unions. At the outset of the meeting, a two- minute silence was observed for those who had lost their lives during the agitation. Mr Tomar said that keeping in mind the discussions during the previous meeting the government is committed to finding solutions on farmers’ issues with an open mind and both sides need to take steps forward to find a solution.

Talking to reporters after the meeting, Agriculture Minister Narendra Singh Tomar said that the government wanted farmer unions to discuss the three farm laws clause-wise, but they could not find any solution as farmers unions remained adamant on the repeal of these three laws. Mr Tomar said that the government and farmer unions both decided to meet again for the next round of talks on 8th of January for a further discussion to arrive at an amicable solution.