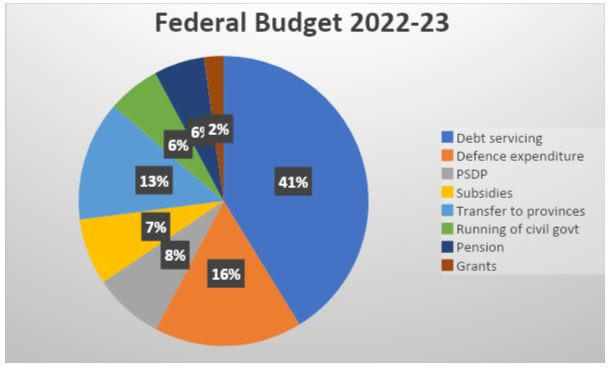 Ankit Singh
Add Comment
A budget outlay of PKR 9.5 trillion is aimed toward fiscal consolidation due to higher energy prices, taxes and growth in medium-term budgetary strategy as consulted with IMF.

On 10 June, Finance Minister Miftah Ismail presented the Annual Federal Budget in a rather commotion-free house. Blaming the previous government for maladministration, he was promiscuous with a call for tougher measures to execute fiscal consolidation, meaning curbing inflation and stabilising forex reserves enabled by a slump in growth.

Brief Review
The proposed expenditure of PKR 9.5 trillion, higher by nine per cent (PKR 8.4 trillion) from the previous year, is divided into debt servicing (41 per cent), defence expenditure (16 per cent), public sector development programs (7.6 per cent), subsidies (7.3 per cent), transfers to provinces and other (13 per cent) and contingency, grants, running of civil government and pensions (2.1 per cent, 5.7 per cent and 5.5 per cent respectively). Majorly the portion of debt servicing which is slated at PKR 3.592 trillion (USD 18 billion) is going to domestic debt servicing (86 per cent of net debt servicing for the next financial year) and the rest of PKR 0.511 billion will be for foreign debt servicing.

The budget did not mention specific sources of non-bank borrowing due to ongoing discussion with IMF in Doha and awaiting confirmation of another request on rollover of USD 2 billion State Administration of Foreign Exchange (SAFE) loans maturing over the next two months. The budget is proposed when the government is sitting on fences of economic and political uncertainty.

Budget 2022: Five Major Issues
First, lamenting the previous government yet continued to follow up with IMF targets. The statement by the ministry of finance called the budget a growth budget, however, targeting the current account deficit (CAD) to 2.2 per cent (USD 8.43 billion), while CAD for the current year stands at 11.16 per cent of the GDP (USD 43.33 billion). Reducing CAD by almost 10 per cent mandates a huge reduction in imports, which is likely to reduce the scope of revenue, which has been set at USD 36 billion for the FY23 as per the IMF requirement, for FY22 the collection so far has been USD 26.75 billion. Imports have been targeted at USD 70 billion in FY23, lower by USD 6 billion from the current year, and exports up by USD 3.7 billion to USD 35 in FY23.

Second, the cat and mouse game of hunting for more taxes. The budget has new taxes worth PKR 0.74 trillion (USD 3.7 billion). Tax increases in luxury commodities like luxury cars, a reversal in subsidy to real estate and higher rental income tax, increase in advance and withholding tax for the banking sector (increased by 3 per cent to 42 per cent, including super tax), an additional tax of two per cent for those earning above PKR 30 million (USD 1,50,000) and reduction in power sector subsidies (to provide additional revenue amounting to PKR 1.5 trillion by national average electricity tariff) due to pressure from IMF. The budget has tried to plug the leakages along with new pincers like the reintroduction of petroleum levy and rationalization of petrol and power tariffs.

The government has shown its intention of tightening the tax collection as the tax slabs for the salaried class had been reduced from 12 to seven, limiting the upper ceiling of highest income at PKR 12 million, however, IMF wanted an expansion of income tax slabs to increase tax net. This is likely to create a logjam in ongoing discussions. The budget does not induce strong reforms rather it aims to fulfil benchmarks dictated by the IMF to improve credit perception and worthiness of the country.

Third, so much for creditworthiness on a more volatile exchange rate. The benchmark of PKR 200 per USD creates an argument of price volatility, the market perception will more strife with speculation on a visibly clear mark of PKR at 200. The stagnant trend of the currency around the mark of 200 is likely to induce more uncertainty, while Pakistan needs some stability to attract more investments. Complementing the price volatility would be the upcoming export-import bank, “The Export-Import Bank of Pakistan Bill, 2021” mandates to fulfil the conditionality of the International Monetary Fund (IMF) to obtain reinsurances from any foreign agencies or nay insurances companies in or outside Pakistan.

Fourth, much-awaited fiscal reforms and capital allocation preceding the budget. A sovereign central bank will be under pressure government to suit the budget targets, be it inflation or ways of fiscal consolidation. Recently on 8 June, the government approved USD 5.75 billion in water projects aimed at boosting power production. The intention to provide more power to increase productivity is an effort in the right direction. However, Moody investors service has downgraded the outlook of the government of Pakistan from stable to negative, the outlook of several banks from stable to negative and even downgraded outlook of the Water and Power Development Authority (WAPDA), the country’s premier agency on water and power distribution, from stable to negative. Many things are not helping Pakistan in the near term.

Fifth, Pakistan gearing up for a slowdown and contractionary path. On 7 June, World Bank in Global Economic Prospects raised the issue of stagflation with potentially harmful consequences for middle- and low-income economies alike. The current ruling government has raised the price of petrol by PKR 110 in just two months. The higher petroleum price would increase the cost of everything again be it, milk, textile or even power tariffs. Sustained inflation, hence would induce more unemployment as industries will manage to retain margins. Fiscal consolidation is a two-way process but as technocrats keep on extracting more taxes, this will further reduce the propensity to consume in Pakistan and savings will eventually dry for the common man.

The finance minister evaded the question of increasing poverty levels in a post-budget press conference. The urgency seems to maintain the status quo of growth trajectory with a slowdown in the near term, in no way the government has realised the much-needed focus on bridging the inequality and enabling fair distribution of income. Debt servicing is almost eating half of the budget, reflecting the government eyeing mitigating the debt commitments. Eliminated custom duty on agri-machinery and raw materials will facilitate export-oriented manufacturing industries, which is likely to cost the government around USD 8.78 billion in revenues however primary sector of the economy is expected to gain through filter down procedure from production spurred by exemptions. The measure to strengthen for ex reserves in short term is not mentioned in the budget and the government is likely to go for deferred payment of oil and more loans.

Initial Responses to the budget
An editorial in Dawn wondered whether the budget was just a tick-list to approve the IMF loan programme. The Budget weighed on rhetoric and lacked in substance due to the major focus on controlling inflation and twin deficits.

Another editorial questioned the feasibility of attaining five per cent growth with 11.5 per cent inflation and assessed that inflation would go as high as 20 per cent due to a drawdown in energy subsidies and tax recoveries.

On the first day of the week after the budget was presented the previous week, the Karachi Stock Exchange-100 index fell by 925.31 points. The market reacted to increased taxes on the banking sector.

An editorial in Business Recorder, pointed out various discrepancies in the budget, from projecting a revenue rise of 13.4 per cent that was not matched by the Federal Board of Revenue’s fact sheet, to the use of the rupee-dollar parity of 183. The article speculates another increase in the discount rate by 100 basis points due to contractionary procedures.

The Dispatch is present across a number of social media platforms. Subscribe to our YouTube channel for exciting videos; join us on Facebook, Intagram and Twitter for quick updates and discussions. We are also available on the Telegram. Follow us on Pinterest for thousands of pictures and graphics. We care to respond to text messages on WhatsApp at 8082480136 [No calls accepted]. To contribute an article or pitch a story idea, write to us at [email protected] |Click to know more about The Dispatch, our standards and policies
TagsThe Dispatch