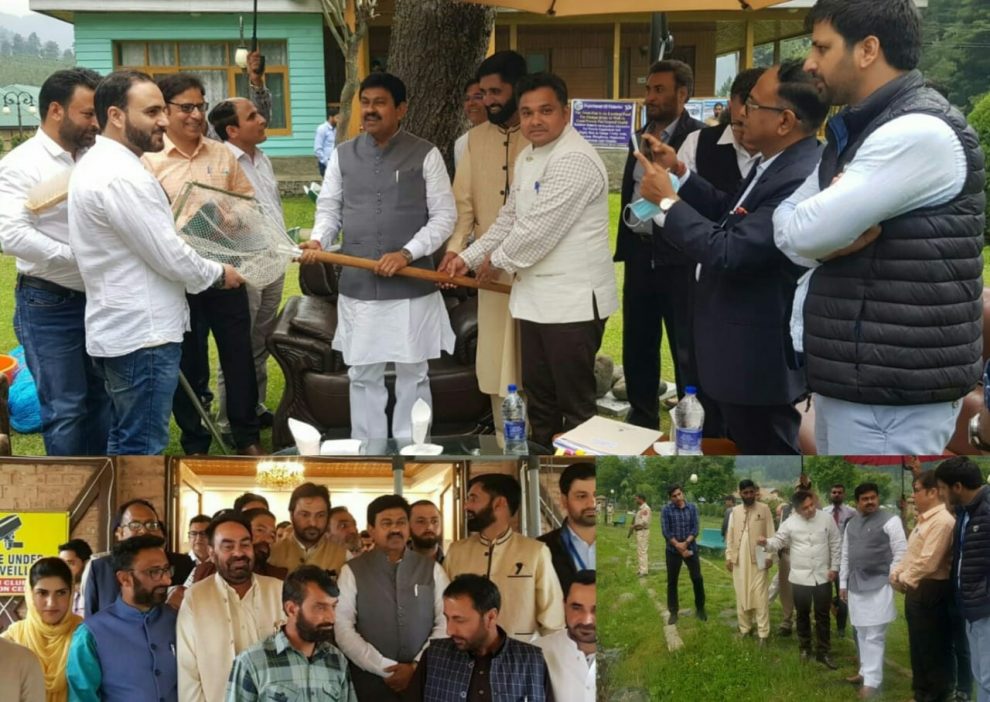 ANANTNAG: Union Minister of State for Home Affairs, Sh. Ajay Kumar Mishra commenced his two day tour of Anantnag today. On the first day of the tour the Minister arrived here at Pahalgam.

The minister met delegations of PRIs, hoteliers and civil society members of the area.

Sh. Ajay Kumar Mishra while addressing the members emphasized that developmental works are being completed at a rapid pace. He said that not only has the quantum of work increased, but also the quality of works has improved and public funds are being spent in a transparent and accountable manner.

The minister said that the government is committed to transforming UT of J&K and ensuring that all services are available to the public. He said that development had been restricted for many years after independence due to concentration of power in some hands. He said that in a democratic system, the government must ensure progress and prosperity of the people. He said that three tier panchayati system has facilitated ground level development and he is confident that at the present pace of development, the welfare and prosperity of the people will improve by leaps and bounds. He said that thriving participative democracy, the enthusiasm of council members, their understanding of public issues and their empowerment to redress public grievances is an evidence of the transformation in the UT. Addressing the council members, he said that their names will be written in golden letters for their contribution in establishing and empowering participative democracy at the grassroot level.

The MoS appreciated the role played by the PRIs in effective implementation of participative democracy. He gave them a patient hearing and assured them that all demands will be taken up at the appropriate forums and issues will be resolved on priority.

The delegation of hoteliers informed the dignitary about the heavy flow of tourists and said that they are committed to providing world class facilities. The delegation apprised him that repair and renovation of old structures has to be taken up. The Deputy Commissioner informed that a structured mechanism has been put in place and the existing mechanism will be expedited to resolve the grievances. The delegation also requested to accord the status of industry to tourism and allow the benefits of government schemes. The minister said that matter is under consideration and assured the delegation that the issue of renewal / extension of lease will be addressed.

The civil society put forth the issue of congestion on the roads of Pahalgam due to heavy influx of tourists. The dignitary said that the matter will be taken up with concerned quarters and appropriately redressed. The Deputy Commissioner said that an elaborate traffic plan has been notified for Sri Amarnath Ji Yatra and critical roads including those to Chandanwari and Aru are being upgraded. The delegation raised the issue for revision of rates for vehicles plying on Pahalgam-Chandanwari route and the Minister assured them that the matter will be taken up with appropriate authorities.

The Minister met members of District Development Council Anantnag. BDC Sh Choudhary Hameed said that they are thankful to the Government for establishing the three tier Panchayati Raj system in the UT. He said that they feel empowered in the real sense and have been given powers for implementation of development works on the ground. He stressed on increased coordination between PRIs and officials of district administration. He requested that 15th Finance Commission grants be allocated for UT of J&K. Another member of the council said that augmentation of staff in Rural Development Department must be taken up. DDC Member Shangus said they are completely committed to implementation of Panchayati Raj System on ground and said that upgradation of infrastructure at Block level needs to be taken up. The minister was apprised by Dr Singla that land has been identified for development of office complex and associated accomodation for District Development Council members and its execution will start shortly.

Vice Chairperson DDC Sheikh Javed said that the administrative systems have been streamlined and appropriate platforms have been created for service delivery and grievance redressal. He said that coordinated effort by the council and the officials has been instrumental in changing developmental landscape of the District.

Chairman DDC MY Gorsi thanked the government for various progressive measures targeted at welfare of tribals.

At Fisheries Hut Pahalgam, the dignitary interacted with beneficiaries of various schemes who have established trout raceways and trout hatcheries under PMMSY. He also distributed trout farming equipment among the beneficiaries. Deputy Director Fisheries gave the minister a brief overview of the various schemes being run in the district and benefits accorded under PMMSY.

Later, the MoS visited 116 Bn CRPF camp Pahalgam, where a Sainik Sammelan had been organised. The MoS interacted with the Jawans on the occasion and praised them for their contribution in ensuring peace and prosperity.