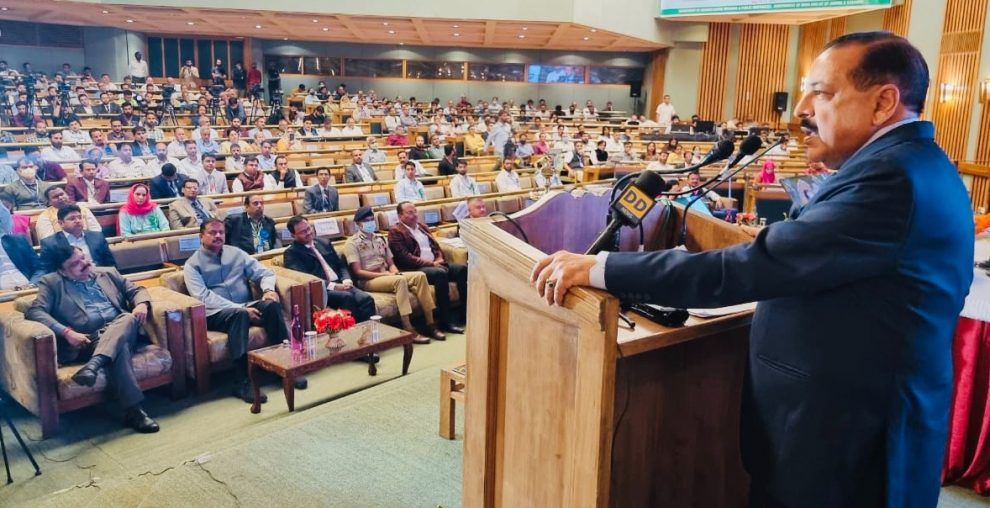 SRINAGAR: Centre will train 20,000 Jammu & Kashmir Govt officials in grievance redressal and the task will be undertaken by the Department of Administrative Reforms, Union Ministry of Personnel.
This was announced here today by Union Minister of State (IC) Ministry of Science and Technology; Minister of State (IC) Ministry of Earth Science; MoS of Prime Minister’s Office and Ministry of Personnel, Public Grievances & Pensions, while inaugurating a two day Regional Conference on the theme “Bringing Citizens and Government Closer – Through Administrative Reforms” at SKICC Srinagar.
The Regional Conference is being organized by the Department of Administrative Reforms and Public Grievances (DARPG), GoI in collaboration with UT of Jammu & Kashmir. The conference is being held in the backdrop of replication of good governance practices in Union Territory of J&K. 16 PM Awardees presented their innovations in the 2 day event.
Dr Jitendra Singh said, Jammu and Kashmir became the first UT in the country to have Good Governance Index and was also first to launch District Good Governance Index for 20 Districts of the Union Territory of Jammu and Kashmir in January this year. He said, the Index represented a major administrative reform in benchmarking good governance at District level and a significant step for timely collation and publication of statistics at State/ District level.
Dr Jitendra Singh said that governance reforms must be taken to next level and he proposed the idea of Aspirational Blocks on the lines of Aspirational Districts based on 41 scientifically evolved indices and aimed at bringing districts lagging in certain parameters at par with the best performing districts.
Dr. Jitendra Singh said that Prime Minister Shri Narendra Modi has accorded the top priority in bringing the overall development in J&K UT. “Prime Minister’s objective scientific approach even in designing, structuring and planning in administrative reforms has worked to a great benefit as it is based on very objective parameters,” he said. Citing examples of Baramulla and Kupwara being under the Aspirational District Program (ADP) he lauded the Central Government’s such initiative which he called dynamic in approach based on real time evaluation.
Speaking during the meeting, Union Minister said that Central Government is committed to raising the living standards of its citizens and ensuring inclusive growth for all. He said that ADP closely focuses on improving people’s ability to participate fully in the developmental economy.
Taking about reforms in governance he said that it becomes imperative to reform rules that have become obsolete over time. Keeping pace with the contemporary time is the need of the hour. Such reforms are an example of minimum government and maximum governance and reform perform and transform slogan, he said. These are not only governance reforms which are being spoken about but also huge social reforms which are meant to carry India on the path to become a part of the global world.
During the two-day event, presentations are being made on priority programs from the Prime Awards for Excellence In Public Administration, 2021; Promoting “Jan Bhagidari” or People’s Participation in Poshan Abhiyan; Promoting excellence In sports and wellness through Khelo India scheme; Digital payments and good governance in PM SVANidhi Yojana; Holistic Development through One District One Product scheme; Seamless, End-to-End Delivery of Services without Human Intervention (District/Others) and Innovations (Centre, State and Districts). One Session is also on the theme “Improving e-Service Delivery in J&K.”
In his address, Secretary, DARPG, Shri V.Srinivas said that the conference is an effort to bring the Government and Citizens closer through various administrative reforms at centre, state and district level. This is being enabled by use of digital technology, pursuing next generation reforms and innovations with policy objective of “Maximum Governance, Minimum Government”, entailing Government process Re-Engineering, Universal access to e-services, excellence in digital Initiatives at district level and excellence in adopting emerging technologies and use of ICT Management.
Shri Arun Kumar Mehta, Chief Secretary UT of J&K while addressing the inaugural session of the Regional Conference informed about the various reforms around good governance and effective implementations of schemes and initiatives over the recent past.

Ensure safety Of Kashmiri Pandits: Arvind Kejriwal to Centre
Why you did not meet LG over killing of Kashmiri Muslims in past 3 years? Sajad Lone asks NC, PDP
Comment