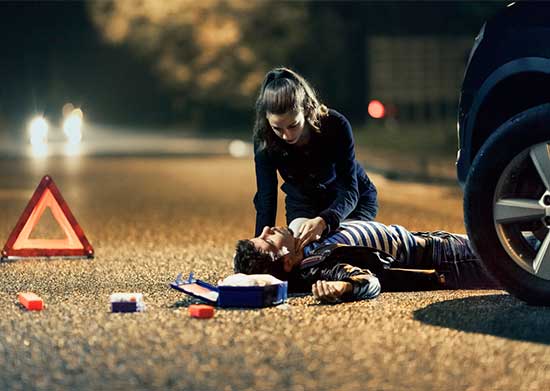 The growing number of accidents is cause of worrying for all of us. The alarming rate of mishaps in the J&K Union Territory is of immense concern for everyone, within and outside the administration. Adhering to road safety measures is an important factor in our day-to-day life in order to prevent road accidents and loss of precious lives.

According to a report released by the National Crime Record Bureau (NCRB) recently atleast 4,37,396 cases of road accidents were reported last year causing over 1.54 lacs deaths. These accidents left 4,39,262 persons injured as per Union Ministry of Road Transport & Highways. A World Health Organization (WHO) report points out that about 50% of road accident victims die within 15 minutes of the accident due to severe cardiovascular or neurological injuries. “They can be saved in golden hours through basic life support but bystanders do not come forward to offer help fearing harassment by Police and for the fear of detention at hospital and also due to legal formalities”. J&K ranks second across India in the tally of road accidents per 10,000 vehicles with an average over 1000 deaths every year. As per figures, of J&K Traffic Department over 10,850 people have lost their lives and almost 89,597 received injuries in approximately 57,000 road accidents for last 10 years.

In 2010, Bhumesh Sharma, an expert, wrote an article “70%-80% road accident victims can be saved if they get timely first aid” which was published in the book “be part of the solution On Roads” and in newspapers. In the article, author says, the Hon’ble Supreme Court in the case of Pt. Parmanand Katara V/S Union of India in Criminal Writ Petition No. 220 of 1988 Dt. 28/08/1989 [AIR 1989 Supreme Court 2039 has also stressed that the victims of road accidents need to be provided Medical Aid in the first instance and thereafter, the procedural laws could operate however, due to fear of harassment people do not always come forward to attend them.

Bhumesh Sharma an expert and founder of “be part of solution ON ROADS”, said that only few states had complied with Hon’ble Supreme Court verdict. It was on Mar 30, 2016 the Apex Court approved the guidelines and standard operating procedures issued by the Ministry of Road Transport and Highways under Article 141 of the constitution.

Hon’ble Supreme Court also direct that the scheme framed by the Central Govt. and this order be widely published through Electronic Media & Print Media for the benefit of public so that public is more aware and that serves as impetus to Good Samaritan to extend timely help and protection conferred upon them without incurring the risk of harassment.

No Police Officer or any other person shall compel a Good Samaritan to disclose his/her name, identity, address or any such other personal details. However, he may voluntarily choose to disclose the same. The people helping the road accident victims on the spot can no longer be put through legal quagmire at hospital or later by law enforcement authorities. The Ministry of Road Transport & Highways notified the rules for the protection of Good Samaritans. The rules provide for the rights of Good Samaritans which include that the Good Samaritan be treated respectfully without any discrimination on the grounds of Religion, Nationality, Caste or Sex.

The rules also provide that every Public & Private Hospital shall Public a charter in Hindi, English and Vernacular language, at the entrance or other conspicuous location, and on their website, stating the rights of Good Samaritans. Over 80,000 lives can be potentially saved in India if bystanders come forward to help. According to the WHO in the absence of established emergency medical services, bystanders can play a game changing role in saving lives. They can call for help provide First- aid to the injured and even rush them to the nearest hospital, if an ambulance does not arrive in time.

The Apex Court gave it the force of law, making it binding on all States/Union Territories. Karnataka was the first state to come with a proper local law announcing cash rewards to Good Samaritans. As per the law, The Good Samaritan can leave immediately after ensuring that the mishap victim is in safe hands of doctor and hospital authorities. It is extremely important for Governments to come up with awareness programmes on the law and introduce rewards so that people could be encouraged to be a “Good Samaritans” the author said.

Return of Politics in Kashmir?

The trees worshipped by Hindus

Road Safety Expert, Two times National Award winner on Road Safety from Ministry of Road Transport and Highways Government of India. he can be reached at [email protected]

Can visits by European Union Parliament Delegation to Kashmir achieve anything?
Narco-terrorism: A new challenge for Rajouri and Poonch
Comment