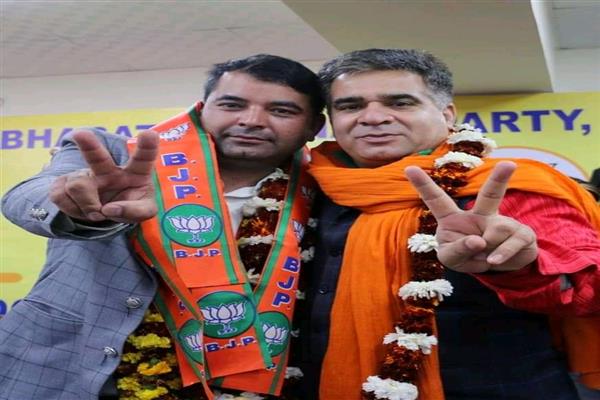 JAMMU: Mubashar Azad, a nephew of Senior Congress Leader Ghulam Nabi Azad on Sunday joined the Bharatiya Janata Party (BJP) along with supporters at the BJP party headquarter in Jammu.

Sources said that Mubashar Azad, who was a youth Congress leader from Doda district, was closely associated with former working president Rahul Gandhi.

Speaking on the occasion, Mubashar Azad, said that he was deeply hurt over the disrespect of his uncle, former Chief Minister Ghulam Nabi Azad by the present Congress leadership in Jammu and Kashmir and the Centre. He said that the way Congress party treated Ghulam Nabi Azad, one of the charismatic leaders of the Congress party, has hurt the sentiments of the common masses and stressed that PM Modi has given recognition to the efforts of the former CM.

He added that while there is total selfish infighting within the Congress party, Modi has gained the trust of the common masses and thus we pledge to stand with Modi and BJP in the interest of the society and the Nation.

On the occasion, Ravinder Raina added that these new entrants led by Mubashar Azad will not only strengthen the party in Doda, Kishtwar, Ramban and other areas but will encourage the youths from the whole region of Jammu and Kashmir to work for the Nation and the society.

He appreciated the efforts of senior BJP leaders Sunil Sharma and Shakti Parihar along with Dalip Parihar, for their efforts in strengthening the party with these young and energetic faces—(KNO)