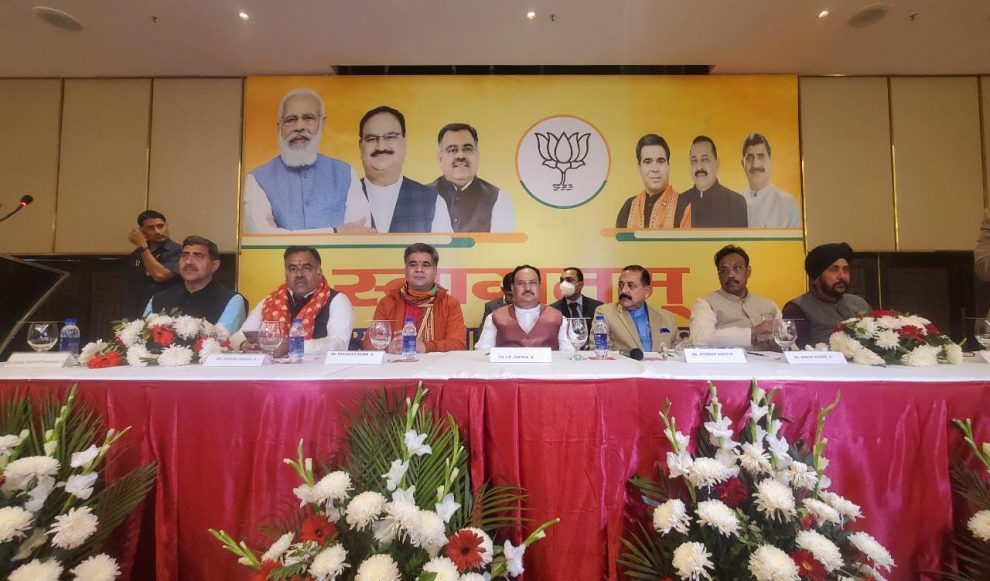 JAMMU: Bhartiya Janata Party (BJP) national president J P Nadda Monday asked party men to get ready for assembly elections in J&K stating that present was theirs and efforts should be made to “grab future too.”

Nadda arrived in Jammu on a two-day visit. He chaired a high level meeting of party leaders at Katra, Jammu in which senior BJP leaders that include national General Secretaries Tarun Chug, Vinod Tawdey, MoS PMO Dr Jitendera Singh and J&K BJP chief Ravinder Raina besides all party leaders from J&K were present.

Sources privy to the meeting told that Nadda while addressing the party workers showered praises on party’s Kashmir-based leaders for remaining steadfast during tough times and braving violence. “In 2008, no one could have thought that BJP rallies would be held in Kashmir as violence was at its peak. But I saw rallies and other programs of BJP taking place as the party’s Kashmir based workers and leaders remained committed towards the party,” Nadda told the meeting, as per sources. He, as per sources, hailed the party’s Kashmir based leaders for their efforts towards strengthening party roots in the Valley and urged them to keep moving in the right direction.

“You should get ready for the assembly elections. Present is ours but we all must make efforts to retain the forte and grab the future too,” Nadda was quoted as having told the meeting, as per sources.

He also checked the party pulse stating that the party was getting stronger with each passing day as more and more people are joining it. “We have 18 Crore workers across the country which really is a big achievement. In J&K, we have to strengthen the party at booth and constituency levels. You must build a close rapport with the people in villages, towns and constituencies to make BJP stronger day by day,” he told the meeting, as per sources.

Nadda listened to the party men from Kashmir and Jammu patiently. Sources told KNO that Nadda asked party leaders and workers to promote Prime Minister Narendera Modi’s vision in the months ahead. “Keep the momentum going, I assure you that the future will be ours,” he told the meeting—(KNO)

Exit polls predict win for BJP in UP, AAP in Punjab
500 enterprising farmers to be provided with handholding, knowledge-based intervention every year to harness potential of organic produce: LG Sinha
Comment