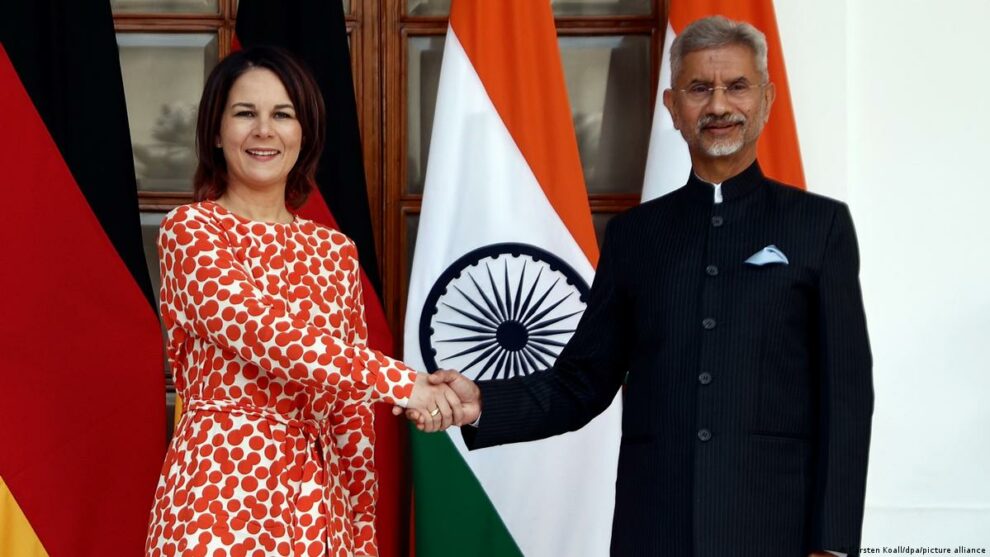 The Foreign Minister of Germany Annalena Baerbock was in India this week on a two-day visit. The purpose and the timing of the visit coincided with Germany finishing its term as the president of G-7 group this month as India takes over as the president of G-20 countries. Some observers suggest that it was a make-up visit after the youngish Foreign Minister of the Green Party of Germany had advocated international involvement in resolution of the Kashmir issue between India and Pakistan.

However, in the words of the foreign Minister, the focus of her visit consisted of three areas; economic cooperation, climate crisis mainly dealing with the energy question that enhances the use of renewables, and the security. Germany leading in the replacement of fossil fuel and nuclear energy will help India to make that change-over in the energy sector.  The Foreign Minister said, “We are not making empty promises when we say that we want to further strengthen our economic, climate and security-policy cooperation with India, beyond what we are already doing through our strategic partnership. This is why, while in New Delhi, I will also be signing a Mobility Partnership Agreement that will make it easier for our citizens to study, conduct research and work in each other’s’ countries”.

Be the motivation of the visit as it may, let us decipher from her statements, and interactions with her counterpart and other officials, Germany’s current strategy on India that may impact the growth of relations between two countries. For a start, it was assumed that the western counties including Germany were looking for a substitute country to China for their investment. Germany had specifically mentioned India as an obvious destination. This perception was clearly dispelled by Baerbock. She said “no” in response to a specific query that Germany was treating India as a replacement for China.

Baerbock made a distinction between Germany’s policy on China and that with India. She said that they have a value partnership with India where as their relations with China are economic. Germany has been maintaining that China poses ‘systemic threat to the world”. Baerbock reiterated that position in New Delhi. Referring to Beijing as a “systemic rival”, Baerbock made clear that Germany’s policy would be more muscular and competitive. She said, “China has changed very much over the last few years and the whole region can see this. Therefore, the exchange with actors from the region is very important to us, especially with India, which is a direct neighbour (of China),”

Berlin, Baerbok added, would pursue an Indo-Pacific strategy that focused on deepening cooperation with partners like India and Japan while cutting dependence on China. “There is huge potential for cooperation with India not only on the economic side but also on the security situation.” The Minister emphasised that Germany was always willing and striving to reinforce a rule-based international order in the world including a in the India-pacific region.

Baerbock backed her assertion by invoking the sailing of Brandenburg-class of German navy to Mumbai. She said, “With the visit of the frigate Bayern to Mumbai at the beginning of the year, we have shown that we will underpin our (Indo-Pacific) guidelines with concrete action. In the future, we want to further intensify German-Indian cooperation in the field of security policy.” She also announced that Germany would also look to engage with Prime Minister Modi’s Indo-Pacific Oceans Initiative.

The intentional political observers wonder whether the Foreign Minister’s statements on China and India-pacific. The German Foreign Minister’s comments sit somewhat awkwardly with the more conciliatory position towards China taken by Chancellor Olaf Scholz. German Chancellor recently visited China to meet with President Xi Jinping after the latter was reflected by the Communist Party Congress. Scholz was accompanied by a high-powered group of businessmen from Germany’s largest corporations. China has been Germany’s largest economic partner since 2016, with the latter’s firms pouring around 10 billion euros in new investments into the Chinese market in 2022 alone.

Chancellor Scholz also controversially approved Chinese investments in Hamburg port, which is Germany’s largest port. The deal was pushed through by the Chancellor despite concerns from numerous ministries about the national security risks posed by the deal.

The clear gap between Scholz’s actions and Baerbock’s statements seem to signal a divide over China in the coalition government that replaced Angela Merkel in December 2021. Scholz belongs to centre-left Social Democratic Party while Baerbock belongs to the Alliance 90/The Green Party, another part on the left of the political spectrum.

Is there a divide really? On deeper examination, we may find that Germany policy could really be consistent. Germany is the strongest economy in the European Union. It has built its economic power systematically and assiduously. German foreign policy is a function of its economic strength.  Germany will even want to separate their economic interest from the security concerns. Whilst it may go with NATO for its security imperatives, it will deal with China for its economic needs. The Foreign Minister said it would be better if the political values and economic needs are co-terminus. If not, the economic interests will override the other priorities. That is the logic that drove the European Union Project with Germany on the driver’s seat along with a few co-pilots from time to time.

New Delhi has not yet grasped the urgency of building its economy. Given the size and potential of the market in India, the entire democratic world including Germany will like India to grow and be ready to absorb the investment. But the priorities of the leadership in Delhi do not seem to respond to this need. China will continue to draw the attention of big economies until they find viable alternatives matching China’s size and structures it has built so far. New Delhi must be wary of this gap.

The other strategic difference New Delhi must be wary of is that for Europe, Russia is the elephant in the room, and they are deeply concerned about the ongoing war in Ukraine. Beijing is not their security concern as much as it is for India purely because of geo-political reasons. They are wary of India’s attitude towards Russia as New Delhi is about Europe’s towards China. New Delhi could use it as bargaining tool by being pro-active in the Ukrainian war in terms of bring about a case-fire if not complete cessation of the conflict.

Yet, the other strategic option is to explore a “third way’ between being Pro-USA or Pro-China. Germany may be exploring this as a pragmatic and progressive line of thinking based on the concept of strategic autonomy. New Delhi has a similar approach. There is then a clear convergence between Germany and India. Is it worth pursuing? At the same time, if Europe can impress upon Beijing to give up its expansionism, and India can persuade Russia to avoid military aggression, we could fast progress towards a rule-based world order!—INFA

The author is a Professor of International Politics at JIMMC.