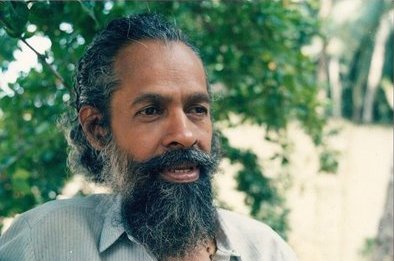 Diravi was walking along the lonely path, thinking of all that his Aachi had told him. “Ho Chettiar…going far?” asked a disembodied voice quite near. It was Anabaiyan, whose head alone was visible over the leaves of the trees.

“Not far. Just for a walk,” said Diravi trying to laugh it off. But Anbaiyan laughed loud and long. “You are returning from Ammachi’s house, aren’t you?” he asked and laughed loudly again.

Diravi walked on, saying nothing in reply. He was immersed in thought, thinking of the story Aachi had told him and talking to himself. “Where did I stop…” I wanted to hear about Ammachi and Paatta, but Aachi was telling me at length about her teacher and the beating her brother took at the hands of her father. I got angry, I asked what the relation between Ammachi and Koonangani Paatta was and she told me all sorts of things which had no bearing on it.

Aachi could not contain her laughter at my anger. “Oh little one. What a temper you have. Why are you so eager to hear that Ammukkutti’s story? Wait, I shall tell you. But that is not the only thing that occupies my mind—I have too many things to talk of. If I were young like you, my mind would be free of many memories, which filled my mind like an overcrowded dungheap. I have to rack my brains to remember what you ask…”

Aachi spat the betel juice and continued from where she had stopped.

“I didn’t say all this about my teacher for nothing. Koonangani Anna’s character became evident from then on. Only when you grant that, will you be able to understand what happened later. The teacher was the first; it led gradually to Ammukkutti… You can tell a man by what he is when young; his habits will continue till he dies.”

“Whenever Father went to the fields, Brother also accompanied him. After the incident with the teacher, Father was sure that if the boy was allowed to continue without work, he would fall into bad ways very quickly. So, he gave him work. Father began to stay at home, attending to his business with the gems. All the other work devolved upon Koonangani Anna’s youthful shoulders. Gathering the harvest, talking to the tenants, collecting and bringing home the coconuts, mangoes, jackfruits, and other produce from the gardens and fields—all this work became Brother’s sole responsibility. He lived in the bullock cart with the spring axle. There was a cart driver called Velu, but Koonangani Anna was an expert himself. He would twist the tail of the bullock and cry ‘drio’ and get quite an amazing speed from the cart…”

I was alert. If allowed to go on about the driving of the cart, Aachi would never come to a stop. She would have begun telling me how many kinds of carts her Father had, the relative merits of each, the points about the bulls they’d had. Once she started on that, she would never arrive at Ammachi’s story. But she continued, “Brother’s expenses were mounting alarmingly. His accounting was short; he could not account for all the monies he received from the tenants. He would quarrel with Mother and occasionally take money from her also…”

“One Friday, Mother and I set out for Velli Malai temple,” Aachi said. “Father did not come. Velu drove the cart…You know Vellai Malai… Have you been there?” Aachi asked, leaving the story halfway. Aachi’s asking me the question like that angered me. For a long time, she had been promising to take me to Velli Malai, but had not done so yet. I had not been there even once. I said in sorrow and in anger, “You’ve been promising to take me, but you haven’t done it so far. How many times have you promised me?

Aachi laughed. “Child, next festive Friday, I shall certainly take you. It is uphill. Even if we go by the shortcut by way of Kurunthankode and Talaikkolam, it is at least three or three-and-a-half miles. Will you be able to walk the distance?”

I waxed angrier still. “Can’t I walk? Only three miles… Didn’t I walk with you to Mondakkadu. How many miles was that? Not only to Mondakkadu, but also to Kumarakovil. Didn’t we walk? Did we go by car?” and she had pacified me.

“All right. We shall go on the last Friday of the next month. Just wait.” Even as he was walking along, thinking of the talk with Aachi, Diravi felt sad that he had never been to Velli Malai. So many last Fridays of months had come and gone, but Aachi had not kept her promise. Many of his friends had been and had returned full of stories about Velli Malai. When a party of his friends set out next, he would also go and not wait for Aachi.

Excerpted with permission from Generations, Neela Padmanabhan, translated from the Tamil by Ka. Naa. Subramanyam, Niyogi Books. Read more about the book here and buy it here.