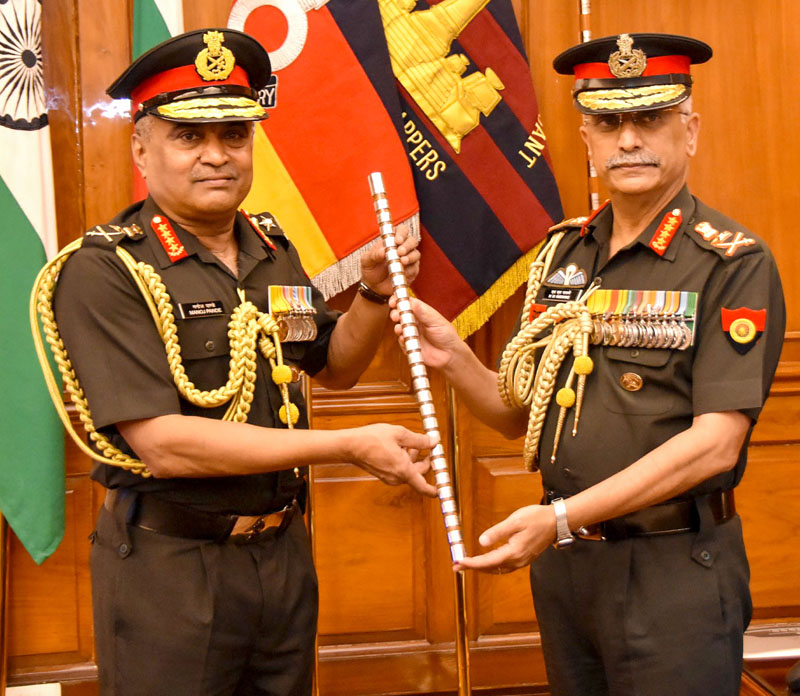 NEW DELHI: General Manoj Pande today took over as the 29th chief of the Indian Army as Gen M M Naravane completed his tenure.Gen Pande was the Vice Chief of the Army. He is the first officer from the Corps of Engineers to head the Indian Army.
Earlier, he was the Eastern Army Commander and oversaw India’s borders with China, Myanmar and Bangladesh.
Gen Pande is an alumnus of the National Defence Academy and was commissioned in December 1982 in the Corps of Engineers (Bombay Sappers).
He commanded the 117 Engineer Regiment during Operation Parakram in the Pallanwala sector of Jammu and Kashmir along the Line of Control (LoC) in Jammu and Kashmir.
Gen Pande is a graduate of Staff College, Camberley (United Kingdom) and attended the Higher Command (HC) and National Defence College (NDC) Courses.
In his 39 years of military career, he has tenanted important and challenging command and staff appointments in different operational environments which include command of an Engineer Brigade in the Western theatre, as part of Strike Corps, an Infantry Brigade along LoC, a Mountain Division in the High Altitude Area of Western Ladakh and command of a Corps deployed along the Line of Actual Control.
He was Commander-in-Chief Andaman and Nicobar Command (CINCAN) from June 2020 to May 2021 and General Officer Commanding-in-Chief Eastern Command from June 2021 to January 2022. He took over as the Vice Chief on February 1 this year.
Gen Naravane took charge of the Army on December 31, 2021. He laid a wreath at the National War Memorial on Saturday as he relinquished the post.
In line with tradition, the retiring General was presented a Guard of Honour in South Block lawns. He later called on President Ram Nath Kovind at Rashtrapati Bhavan.

PM: Consider use of local languages in Courts
Both urban and rural areas in Jammu to face ‘5 to 6 hours powercut’ on rotation basis
Comment