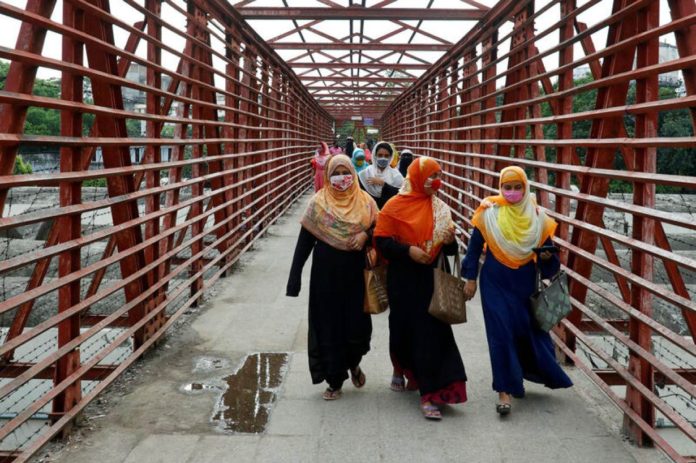 DHAKA: Five years ago, Sadeka Begum was working 12-hour shifts in a garment factory as the main earner for her family in Bangladesh.

Today the 23-year-old is one of the first graduates of a special university programme that aims to inspire female workers to become leaders and boost women’s rights across industries.

Begum now interns for the United Nations children’s agency (UNICEF) and hopes to use her economics degree to launch a project to improve the lives of the children of Bangladeshi textile workers by addressing a lack of schooling and childcare.

“I am an example of how education can change a person,” said Begum, one of four former garment workers to graduate from the Pathways for Promise course at the Asian University for Women (AUW) – based in the southeastern port city of Chittagong.

“Garment workers are the reason why Bangladesh’s economy is doing well,” she added. “Their children deserve better.”

About 470 disadvantaged women including tea pickers and refugees have enrolled for the free degree programme since it started in 2016, and receive a monthly stipend while they study.

Dozens of ex-textile workers are part of the cohort and the AUW’s vice chancellor, Nirmala Rao, said the university was involved in creating internships to tackle a “dearth of female middle and senior managers” in Bangladesh’s garment industry.

While up to 80 percent of garment workers are women in largely junior positions such as seamstresses, the majority of senior management positions are taken by men, U.N. data shows.

Rubana Huq, who heads the nation’s largest trade association for garment manufacturers and was also involved in designing the academic course, said seeing the graduates taking on management positions in the sector would inspire other women to dream big.

“They have different exposure and their outlooks are very fresh,” Huq told the Thomson Reuters Foundation. “They will be able to contribute to how we look at female empowerment.”

Bangladesh is the world’s second largest supplier of clothes to Western countries after China, and relies on the garment industry for more than 80% of exports and four million jobs.

Yet the sector has been rocked in recent years – first by the 2013 Rana Plaza collapse on the outskirts of Dhaka that killed 1,136 workers, then by the novel coronavirus pandemic.

The 2013 disaster sparked efforts to improve labour rights and conditions but the coronavirus outbreak led to thousands of garment workers being laid off in recent months as Western fashion brands cancelled orders due to global store closures.

As workers push for overdue wages and the jobless seek to find work, the AUW graduates want to help to steady the sector and push for change by rising through the ranks of management.

“I want to see everyone with the same eye, it doesn’t matter what category someone’s working in,” said former factory packer Yesmin Akther. “I want people to behave well towards workers.”

Factory owners dismissed the findings of the report as inaccurate while local researchers said verbal abuse of workers was more prevalent across smaller factories and subcontractors.

The university, funded by donors including the IKEA Foundation and the Bill & Melinda Gates Foundation, has female students from across Asia and the Middle East pursuing degrees in subjects such as public health, philosophy and politics.

The students from the garment sector receive full pay – worth about $100 a month – from their employers while studying.

This proves vital as their families rely on the income, according to the AUW, which said it had persuaded several factory owners to back the initiative and allow some of their brightest female workers to leave the workplace for five years.

The former textile workers, who had to pass a rigorous entrance exam for a place on their courses, said adapting to academic life was challenging as was improving their English.

One of the graduates said she used to “just stare at people” at the start because her English wasn’t good enough, while another recalled practising the language in front of the mirror.

Dipali Khatun, who is set to graduate in December, said her ambition was to work for a charity or to return to the garment sector in a human resources role where she could have an impact.

“I would … ensure that there is no bad behaviour against any garment worker,” she said.

Kalpona Akter, founder of the Bangladesh Centre for Worker Solidarity, said she hoped the all the garment worker graduates would return to the sector rather than seek other opportunities.

“If the 100 girls who are studying get into 100 factories, that can bring change because they have seen how difficult lives are for workers,” Akter said. “If they join other industries, they will be empowered, but that won’t help our situation.”

Yesmin Akther is one such graduate who wants to give back.

“My factory paid me for the last four years and supported me so I could study,” the 23-year-old said. “Given the chance, I would like to do something good in return.”