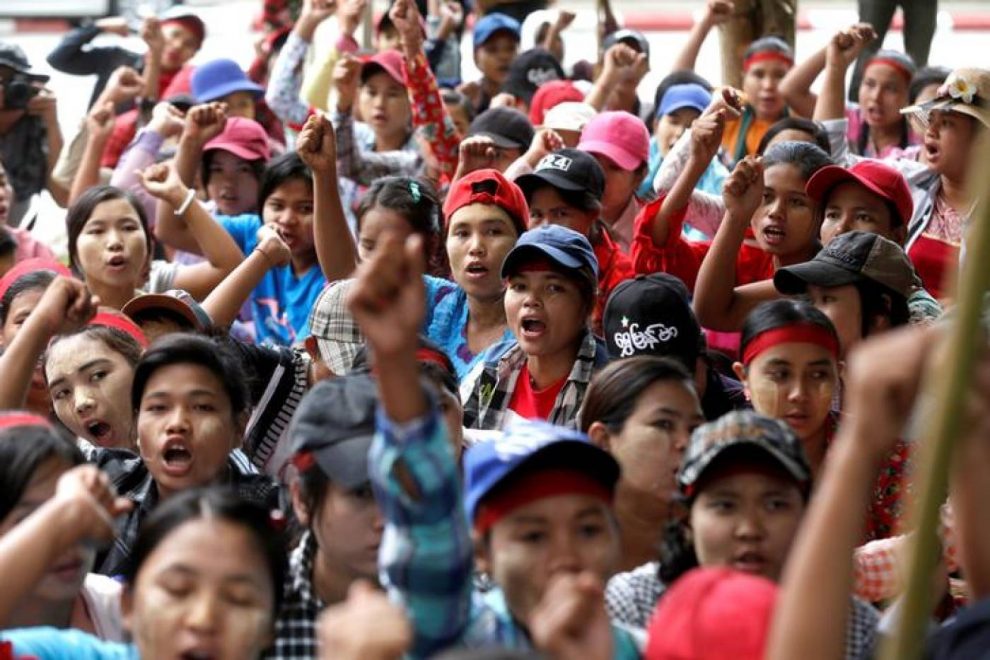 And after a year of COVID-19-induced shutdowns, layoffs and pay cuts, hundreds of thousands of other female workers from the country’s vital garment sector were ready for a fight too.

Lockdown curbs stopped the workers protesting over rollbacks of hard-won labour rights last year, but bubbling discontent has spurred them onto the streets since the government of Nobel laureate Aung San Suu Kyi was ousted on Feb. 1.

“Workers were already angry, they were already activated,” said Moe Sandar Myint, leader of the Federation of General Workers Myanmar, who has become a key figure in the strike and protests that have swept Myanmar in recent days.

“A familiar feeling of suffering had returned and they could not stay silent. They just needed someone to follow – and that is the reason I dared to start the strike,” Moe Sandar Myint, 37, told the Thomson Reuters Foundation by phone.

Shouting through a loudspeaker from atop cars in the days following the putsch, she has been urging people to “fight against the military dictatorship until the end.”

Authorities raided Moe Sandar Myint’s home in Yangon’s Hlaingtharyar township on Feb. 6 but she eluded arrest and has been living on the run since then – leading protests in the day and laying low at night.

“I cannot go home until this is over,” she said late on Thursday, adding that she had been unable to see members of her family, who are also in hiding.

“During the night, I must work on strategy – how to strike, where to protest – and then send invitations to workers: when, where and how we will take action against this military dictatorship,” she said through a translator.

“I’m in grave danger … but I will not be silenced.”

Myanmar’s $6 billion garment sector is a pillar of the economy, accounting for more than 30% of exports in 2019, U.N. statistics show – up from 7% in 2011, when the country began to transition away from decades of isolation under military rule.

With some 700,000 workers, the sector has also given rise to a generation of activists who led a wave of coordinated strikes for better conditions in 2019 – serving as a template for protests against last week’s coup, Moe Sandar Myint said.

“Our network of federations is built on strong communication. We are proactive, we are democratic, and we are decisive under pressure,” said Moe Sandar Myint, who started working in a garment factory when she was still at school.

Networks and communication methods established by the country’s “young but militant” labour advocates are playing a central role in the anti-coup protests, she and other union leaders said.

After devising a plan to subvert an internet shutdown – which came into play when the military blocked servers on Feb. 6 – they turned their minds to civil disobedience, first by protests in factories and then on the streets.

“When we started to campaign inside factories, union leaders came under intense pressure from management and then police,” Moe Sandar Myint said.

“We could not submit to this pressure. The only answer was to go to the streets.”

While she pushed for immediate action, other labour organisers called for calm, many fearing a violent crackdown on dissent by the country’s Tatmadaw military, Moe Sandar Myint said.

Eventually they agreed to form a united front, and when doctors and civil servants began to march on Feb. 5, the garment workers – prevented from airing their grievances for a year – took their cue and flooded the streets.

“Workers are ready for this fight. We know that the situation will only deteriorate under military dictatorship, so we will fight as one, united, until the end.”