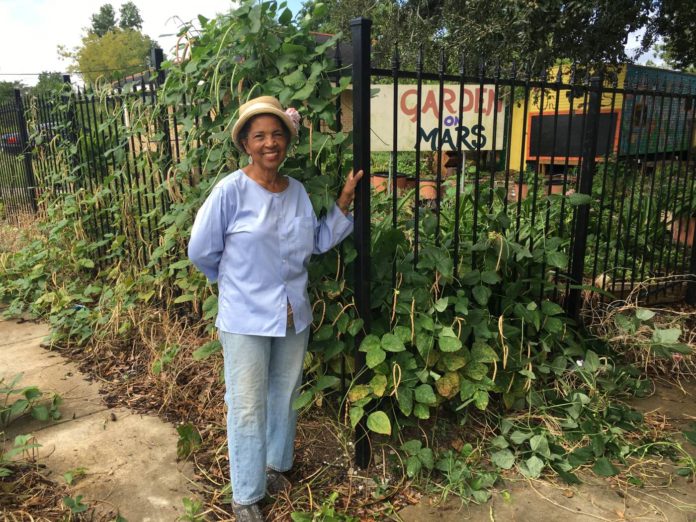 Then there’s the gardens of Jeanette Bell, plots of life she has built to teach people to grow their own food from the ruins.

“Once you start growing, you immediately recognize the difference, instantly, in your food and in your life,” said Bell, 76, founder of the Garden on Mars urban garden project.

“It changes the way you view people and food and living. It changes your whole life.”

Bell has five gardens in the Lower Ninth, the poorest and worst hit of New Orleans’ 17 wards when the levees broke during Hurricane Katrina in 2005 and 80% of the city was flooded.

In the low-lying quarter in the eastern part of the Louisiana city, a levee holding back the Industrial Canal gave way and a wall of water inundated its homes. Residents were marooned for days on rooftops or trapped in their attics.

Bell said she was luckier than many of her neighbors after Katrina made landfall in New Orleans on Aug. 29. Her home in the Central City neighborhood was damaged but livable, and when she returned after a five-week evacuation, her roses were in bloom.

“So I made bouquets,” she told the Thomson Reuters Foundation. “So much was dead in the city, the part of the city that flooded, the landscape died.”

She snipped thousands of roses and created bouquets for strangers driving by and delivered them to first-responders staying at Red Cross shelters.

After the storm, Bell said she found herself lost one day driving through the Lower Ninth Ward, where houses, shops, trees and street signs had washed away.

“I thought, this is ridiculous. You’ve got all of this land that’s not being used,” she said.

“Instead of waiting for the supermarket which is not going to come until you get the customer base to support it, I thought the thing to do was to teach people how to grow some of their own food on the land that they had.”

Her gardens were about to be used in a project with Tulane University as outdoor classrooms for teaching urban agriculture but the coronavirus pandemic has put those plans on hold, leaving Bell to tend to the plots herself.

One plot is a flower garden designed to teach florists how to grow blooms, another is an herb garden for selling to restaurants and markets, and a third an orchard to grow fruit.

A fourth is for beans and greens, and the fifth has a mini-market to teach people how to become a neighborhood vendor.

The lots belong to the New Orleans Area Habitat for Humanity, a nonprofit that has worked extensively to build homes in the neighborhood.

Bell’s first garden was built on Mars Place, hence the name of her project, and for a time she provided her produce to a restaurant and florists, and rose petals to a perfume maker.

“ACCEPT THE THINGS THAT WE CAN GET”

Much of the Lower Ninth Ward fits the definition of a food desert, a low-income area with limited access to healthy foods.

One shop, Burnell’s local market which also has a laundry, internet cafe and more, has opened since Katrina, but it has been struggling to get by during the pandemic and relying on donations from an online charity drive.

Food deserts are linked to poor nutrition, especially if the closest food mart is a gas station or fast-food outlet, and also to illnesses like obesity, cardiovascular disease, diabetes, and hypertension.

Across New Orleans, residents suffer from obesity, diabetes and hypertension at rates higher than national averages.

The gardens are a resource to teach people that “America needs to change its food access,” Bell said.

“We’re importing too much food that can be grown here. We’re talking about jobs here,” she said, with data showing the city’s unemployment rate at 12.9% in June.

“We need to change the image of farming, and the way we do that is put more emphasis on American-grown seasonals. We have gotten people to the point that we’ve imported so much food that people don’t know what seasonal is.”

Seasonal means enjoying the foods that are ripe at the moment and learning to wait for those that are not, she said,

“We want people to recognize that what you produce from your garden is fresher and more nutritious than anything that you can buy in the store.”