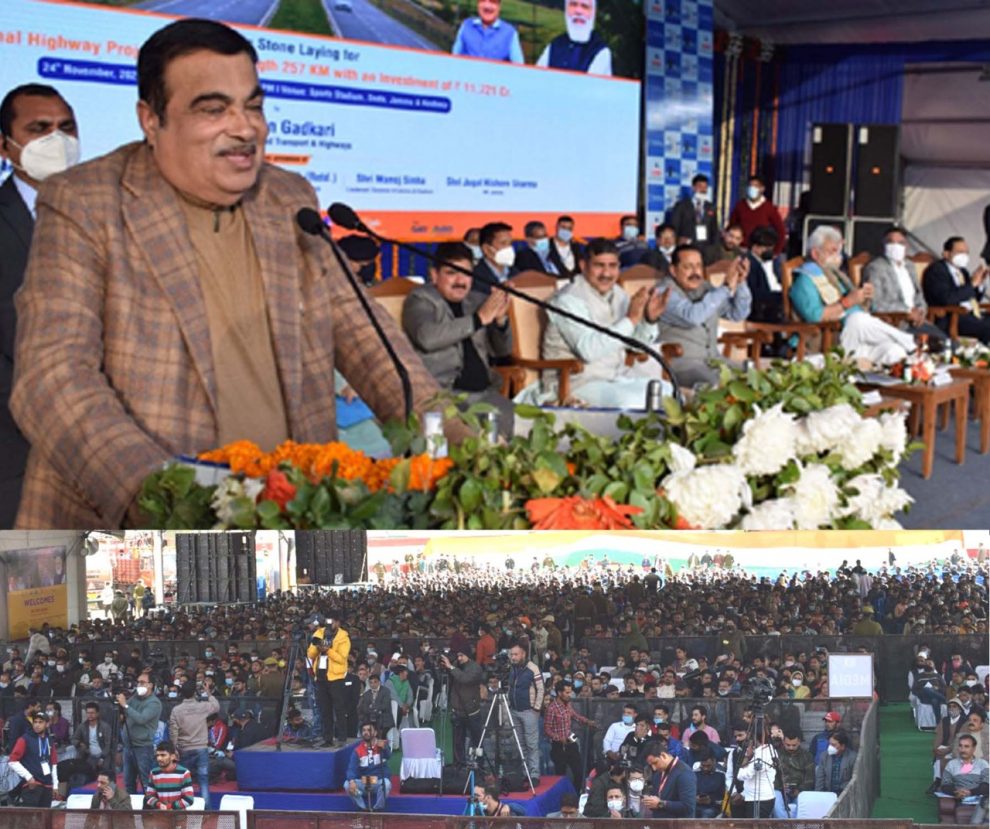 JAMMU: The road map of the central government for Jammu and Kashmir will provide freedom to the people of the Union territory from poverty and unemployment, Union Minister Nitin Gadkari on Wednesday said, assuring of the European-standard infrastructure in the next three years.

The minister was speaking after laying the foundation stone of 25 national highway projects of a total length of 257 km with an investment of Rs 11,721 crore in the Doda district.

These projects, which are strategically important for the swift movement of defence forces along with the agricultural, industrial and socioeconomic progress of the region, will provide all-weather connectivity between Jammu and Kashmir.

The projects will connect all major roads leading to various district headquarters and will help in the generation of employment and self-employment opportunities. The projects will involve rehabilitation and up-gradation of some sections, construction of viaduct and tunnel and rectification of black spots, officials said.

In addition to these projects, Gadkari assured projects worth Rs 1 lakh crore for J&K during the next two years. He also conceded to the demands of various important road projects, including a tunnel for Sadna pass on Kupwara-Tangdhar road and Peer Ki Gali along historic Mughal road, to ensure round-the-year movement of traffic.

“Prime Minister Narendra Modi-led government has taken a pledge for the overall development of J&K and we are working according to it. The road map made for J&K is aimed at giving freedom to the people from poverty and providing jobs to the youth,” the Union minister said.

He added that J&K is a beautiful place and an attraction for the tourists, but besides tourism, the focus is to give a major push to industrialisation and economic upliftment.

“Four things – water, power, transport and communication – are imperative for the success of tourism and industrialisation, which will help in elevating poverty, creating jobs and boosting economy,” Gadkari said adding that the Centre is making all-out efforts to make J&K developed and prosperous.

Referring to the development of roads in J&K, he said that when the BJP came to power in 2014, the total length of roads in Jammu and Kashmir was 1,695 km, which was expanded to 2,664 km by 2021 and “we are expanding it further with liberal funding”.

Gadkari also said Jammu and Kashmir is faced with a peculiar situation and the targets cannot be achieved without the construction of the road tunnels. “J&K is the only part in the country where tunnels worth over Rs 50,000 crore are being constructed.” “In addition to the projects worth over Rs 11,500 crore, we are launching road projects worth Rs 1 lakh crore in the next two years. I assure you that the infrastructure will be at par with western European standards,” he added.

After the completion of ongoing road projects, Gadkari said Jammu and Srinagar will get three corridors that are various stages of construction.

“The Srinagar-Jammu national highway (NH-44) will be completed within two years and the travel journey will get reduced to just four hours,” he said.

Gadkari added that the second corridor will facilitate travel between Jammu and Srinagar through Kishtwar along NH244 and a third corridor will be through Akhnoor-Mughal road.

Referring to the 650-km Delhi-Katra express highway, he said the work was distributed in different packages and has already started on 16 such packages in Punjab and Haryana.

The 135 km in J&K is covered under four packages and one package was already given while the rest are likely to be given within two months after the completion of the formalities.

“After the completion of the Delhi-Katra express highway, the travel time between major cities, including Delhi-Amritsar, will be four hours, Delhi-Katra six hours and Delhi-Srinagar eight hours. This is my promise and will be fulfilled,” he said.

The Union minister said work is also under various stages of completion on the Delhi-Mumbai express highway and after its completion, the travel time between the two places will be only 12 hours, while Delhi-Chandigarh, Delhi-Dehradun, Delhi-Haridwar and Delhi-Jaipur will be covered in just two hours.

He added that India is constructing Asia’s biggest tunnel at Zojila pass along the Srinagar-Leh national highway.

“While awarding the project, we saved Rs 5,000 crore. The project was cleared in a time-bound process with complete transparency where not a single contractor had to visit the ministry.

“The decisions were taken in a fast track manner and everything was done in a corruption-free atmosphere which is the hallmark of the Modi-led government,” Gadkari said.

The minister said an inter-model station will be built at Katra, the base camp for the pilgrims visiting the Vaishno Devi shrine with all facilities, including the railway station, helipad and bus stand that will be linked to Delhi-Katra express highway as well.

Briefing the gathering about the facilities being provided at the model station, he asked the lieutenant governor to identify the place for its construction so that the work on the project is started.