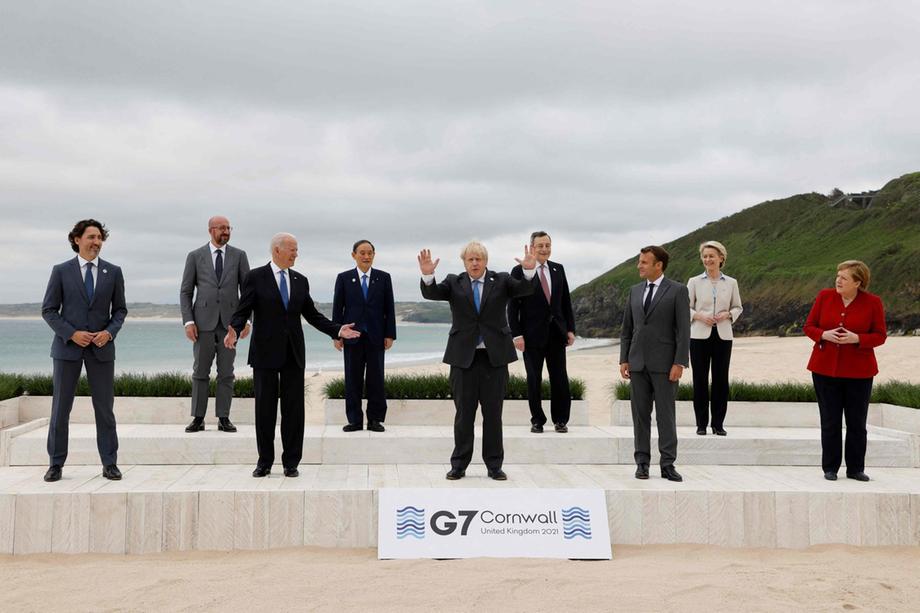 The G7 Summit in Cornwall, the Southeast coast of England was significant on more than one count, unlike in the past. The Summit turned a new page with active return of the United States to the table, as it was emaciated by latter’s vacillation under the tumultuous tenure of Donald Trump. It made a bold and historic proclamation of formation of a ‘coalition of democracies’ against autocracies. The Summit named China the main adversary as a system-threat. And New Delhi, at the behest of the UK, backed by France and the US, seamlessly hitch-hiked to the G7 caravan.

The Summit made some serious decisions on the emerging international issues, that were listed mainly under three rubrics in the 25-page communique issued after three days deliberations from 11 to 13 June. They were the 3Cs of current concerns of heads of seven countries gathered there — China, Covid and Climate change.

G7 comprises seven advanced economies, which are all liberal democracies marked by pluralism and representative governments. The grouping began as an informal, ad hoc arrangement. In the wake of oil crisis in 1973, US Secretary of Treasury George Shultz called a meeting of Finance Ministers of Germany, France, Britain to discuss collaborative actions to deal with the situation. The meeting was held in a library building in Washington DC. So initially the group of 4 was called the Library group. In mid-1973, on US’ suggestion, Japan was included in the group to make it G5. Then two more countries joined the group — Italy in 1975 and Canada in 1976, to make it G7.

In 1998, following the transition of the Soviet Union into democratic politics, Russia was invited to join the group. Again in 2014, in the wake of Russia annexing Crimea, its membership was suspended and later terminated. Other countries are invited as guests from time to time in order to ‘deepen the expertise and experience’ around the table. India has been attending the G7 meetings since 2003 as a special guest.

The countries invited to the Summit included India, Australia, South Korea and South Africa. There was some hint at expanding the group to 11 and call it D11, but no such decision was taken. However, the more expanded group called G20 will meet in Italy next month. This Group includes India and China as well. It will be interesting to watch how China will be treated in this meeting.

G7 obviously targeted China mentioning it four times in its final communique. Beijing has sharply reacted. The spokesman of the Chinese embassy in London said, “The day when global decisions were dictated by small group of countries are long gone”.

The Summit in Cabis Bay was mainly to build a coalition of democracies to counter the growing influence of China. This was in keeping with the fresh initiative taken by Joe Biden for consolidating democracy in the world. Soon after he took over, he has been sounding out to US allies and partners to organise a World Democracy summit. The G7 countries reiterated their resolve to deepen democracy, “We will harness the power of democracy, freedom, equality, the rule of law, and respect for human rights to answer the biggest questions and overcome the greatest challenges”.

Biden revealed the ‘push-back China’ strategy when he said, “democracies are in a contest with autocracies, G7 stood united anew in its democratic values.”. The G7 said, “We will promote our values including by calling on China to respect human rights and fundamental freedoms”. This is the point of entry for India into this coalition. Prime Minister Narendra Modi, digitally addressing the session on Open Societies and Open Economies, highlighted India’s civilisational commitment to democracy, freedom of thought and speech. He pointed out “authoritarianism, terrorism, violent extremism, disinformation and economic coercion as big challenges facing the world today.”

New Delhi has to leverage its political assets for building coalition against external aggression and economic coercion. Although Modi did not mention China in his speech, it was obvious, coinciding with  G7’s reference point.

But New Delhi will have to walk the talk. India has had the largest number of internet shutdowns in 2020. India is getting a bad press internationally for slapping sedition cases, arresting those questioning official policies, raiding offices of newspapers and social media. These do not bode well for India’s unsullied image on democracy and human rights. In a way, it is good that India is shedding off the image of soft-State, but the transformation should manifest in maintenance of law and order, apprehending and punishing the economic offenders, criminals, and fending off external threats and bullying, not in going after dissenting voices.

Minister for External Affairs Jaishankar participating in the Ministerial meeting of G7 earlier on had said, “open societies and personal freedoms require careful nurturing. It must be on guard against fake news and digital manipulation”. It is true that anyone spreading disinformation that causes social disharmony, conflicts and harm, should be brought to book. The harmless fake news could be ignored by the State and be left to the internet users to decide for themselves. The media handles could also have some mechanism for factcheck etc.

On Covid, G7 endorsed the US initiative for a thorough probe into the origin of the virus. It said, “We call for a timely, transparent, expert-led and science-based, WHO-convened phase-2 Covid-origin-19 study including as recommended by the experts’ Report in China.” Even WHO has called upon China to help in the renewed investigation, but it remains defiant. Beijing suggested that covid virus was found first in USA, then it changed to Italy, and one of its studies suggested it came from monkeys in India which were fighting amongst themselves for water etc. China then said, it originated simultaneously in many counties but Beijing was first in reporting it. However, despite China’s diversion and disinformation, the probe is back on the front burner.

G7 promised to raise $12 trillion on pandemic recovery plan. It also promised to supply 1 billion doses of vaccines to the world. But this is too little as the world needs 11 to 12 billion doses. Only 0.3 per cent of the vaccines has gone to the poorest in the world. Perhaps India can fill the void, if the IPR on vaccine is waived. India supported by South Africa made this request. France has also called upon the fellow G7 members to help India access raw material for vaccine production.

It was resolved to enhance the climate finance. The G7 said, “we reaffirm the collective developed countries’ goal to jointly mobilise $100 billion a year from public and private sources through to 2025 in the context of meaning for mitigation actions”. It was also agreed to scale up technologies and policies to speed up the transition away from unabated coal capacity. This issue could be further firmed up in the UN Climate Change Conference (COP-26) in November.

The other major decision was to build an alternative to Chinese Belt and Road Initiative (BRI) which created a debt-trap, by a project called Building Back Better for the World, acronymed B3W. India is inclined to join this initiative as it had refused to be a part of BRI.

To conclude, the bugle has been blown by the G7 to counter China. India is a part of the march. It better play its part resolutely strategically.